Not so "Good Vibrations 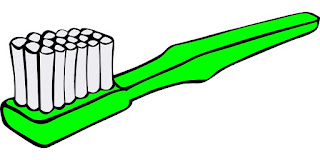 There is a space between the kitchen counter and the stove where, this morning DC dropped his toothbrush.

He uses one of those 3 sided brushes but he also uses a vibrating brush (he was used to using that before I introduced the 3 sided so now he uses both - and yes, he brushes his teeth in the kitchen; that's what works for him - don't judge).

So this thing is stuck there and because it vibrates, is making an awful noise. I was trying to get ready for work and could not move the stove - although I did try. So I told him we would have to leave it there and ask Doug to come over later to get it.

Even though neither of us would be home to listen to it - leaving it there and knowing that we were leaving it there was making DC very anxious all morning. He was still anxious when he left for work. I am hoping it does not ruin his whole day because I know that it certainly could.

Although DC "works from a script" when he calls me after work to tell me he is in the car and "Going home nooowwww" - I can almost guarantee that he will go off script and this toothbrush incident will be the very first thing he asks about. (Hopefully the batteries will die before we get home).

Update: I was shocked that he did not mention the toothbrush during his phone call to me after work. He did mention it as soon as he got home - thankfully it had stopped vibrating by then.

I told him we would have to wait about an hour for Doug to come over. By the time Doug had arrived, I was almost convinced that DC had forgotten all about it and was considering just leaving it there until the next time we had to move the stove (I don't know what the official rule is for cleaning under the stove and refrigerator but I do try to do it at least once a year - which I am sure is not nearly enough). But then I started to think about all of the times I thought he had forgotten about something only to be woken up in the middle of the night to hear about it when he suddenly remembered and was just about to ask Doug to move the stove when DC came out with