From the time that I was old enough to think about it, I always promised myself that if I were ever to have children that there would never be a second in their lives that they would not know that they are loved. This would never be something that they would have to wonder about – not for a single moment…
I think I have lived up to that promise to myself.
DC can and does tell me that he loves me many times a day – complete with and accompanied by the “I love you sign”. I know that he understands in his own way, what that means. This is not to say that I believe it is always all about me. Much of the time it is but there are times when he just needs to have something to say. It’s kind of a comfort thing for him. He says it over and over again when he is in an uncomfortable situation or a place that is new to him.
But, back to me….
I especially love it when he, at 25 reverts back to “I love you Mommy” instead of Mom, Mother or Vickie.  He is probably one of the most lovable people around and I am willing to take complete credit for that.
Is it just learned behavior and not real emotion?
Is it comparable to the times that I have to make a rule because I know he does not understand something?
Is he just, in his mind, following another rule?
Is he just going through the motions because that is what he thinks he should be doing or how he should be acting?
I used to wonder about that when he was younger but now I am convinced that although I am sure that some of that lovability was originally something that he learned, it IS also very full of emotion.
All of the above does not mean that he does not hear his fair share of yelling because let’s face it, every behavior can not be blamed on his autism.
When these situations arise and he is “in trouble” and after I start finding his apology notes everywhere – we always sit down and have a talk.
“No matter how upset Mom might get when you do something you are not supposed to… I always love you. When you are in trouble, I always love you. You never ever have to worry about that.”
When he is “in trouble” and we have not had the talk in what he thinks is a timely manner, he will come to me and say“Always ‘loves’ you.” He knows it, but he needs to have the talk. It’s a ritual and it is comforting to him.
DC’s ongoing “I Love you” campaign has evolved recently. While all of the above still holds true, he has added, ” Mom, do you love me?” (in his high pitched squeaky voice with the emphasis on the “me”).  I know he is not questioning the fact. I know he knows this and I know that he just wants to hear it again. I also know that this line must be something he picked up from a book or a movie because he is using the correct pronouns.
Just to change it up a bit, my response to this question is: “I love you madly”.
Just to change it up a bit more, I will ask: “DC, do you love me?”
His response is another in the long list of words/phrases that he uses that I know I should correct speech-wise, but I do not because I love the way he says them. I hope that this response never changes.
Mom, I love you ‘Magly’.
No corrections necessary……….
Originally posted at Taking it a Step at a Time
Posted by Vickie at 7:02 PM No comments: 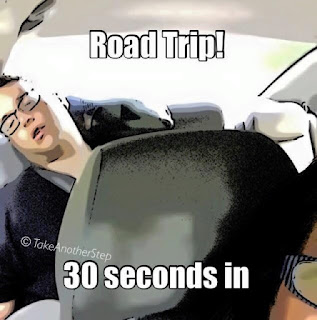 Wish I could fall asleep that fast! #TravelingWithDC
**** 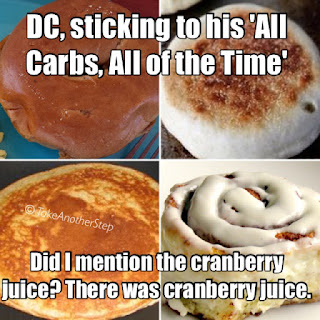 #TravelingWithDC At the hotel - DC and Doug go for breakfast. I normally don't go because they (men) can somehow just get up and go. I on the other hand never feel like I can just get up and go as is... That just isn't happening. Not before coffee anyway.
When they came back (with coffee) I asked DC what he had for breakfast..... (I am again mentioning the cranberry juice, there was juice, really) 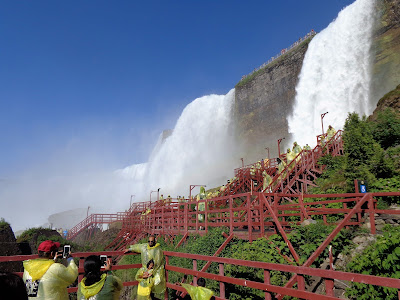 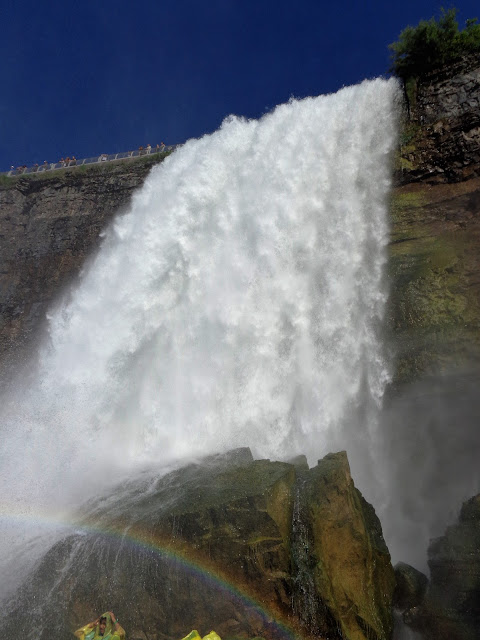 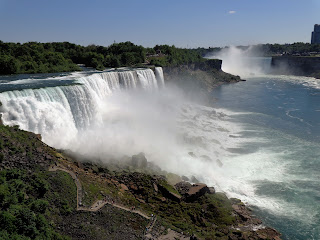 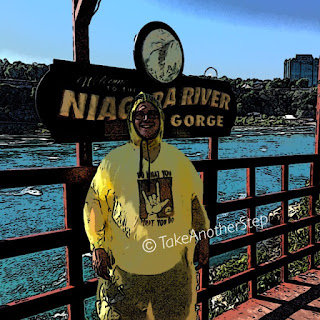 He didn't even make an issue (a big issue anyway) about getting wet! #travelingwithdc
**** 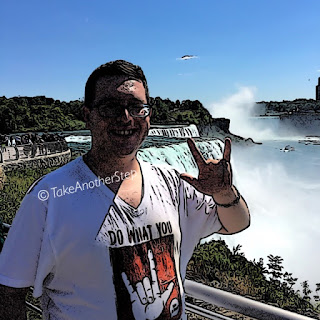 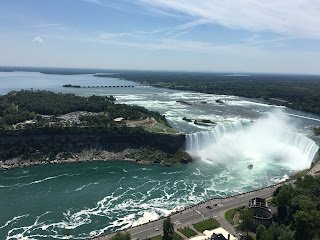 
I'm sure the outdoor entertainment was thrilled to have DC give his critique.... Hard Rock Cafe Niagara Falls Canada #TravelingWithDC 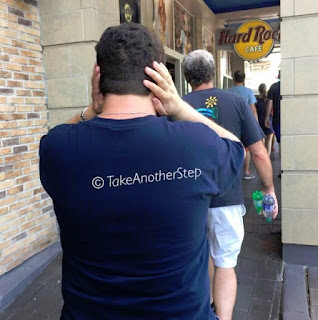 ***
Of course, we couldn't skip Hershey's World of Chocolate!
As if his life depended on it; he begged to go there. In true DC fashion, insisted on buying pajama pants and jelly beans - no chocolate- Figure that one out#TravelingWithDC — at Hershey's Chocolate World Niagara Falls. 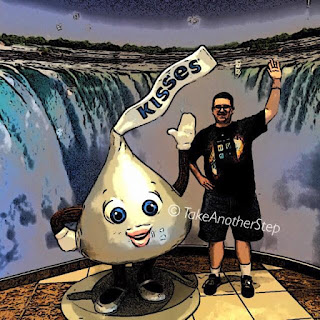 ***
What you must understand is that a Big Waterfall means nothing to him. It's a waterfall - yes it's big but he looks at it like any other waterfall. So why do we keep making him go and look at it? Each time we went to see the Falls, he would look at me as if to say "Are you kidding me? Again? Why?" 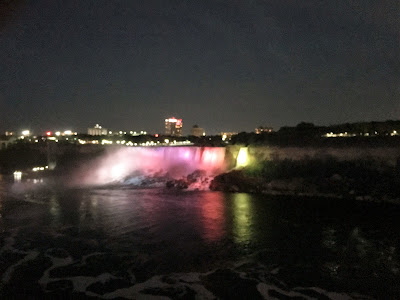 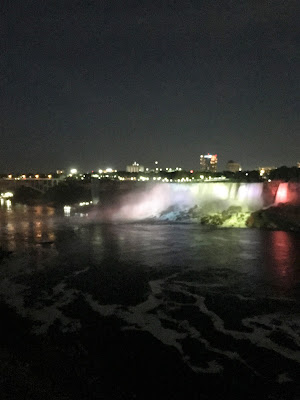 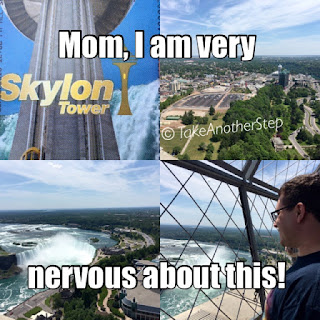 I was probably much more nervous than he was, but we both did really well 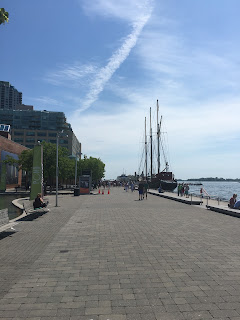 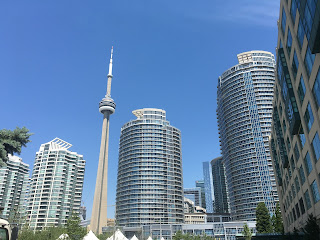 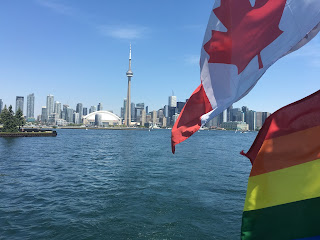 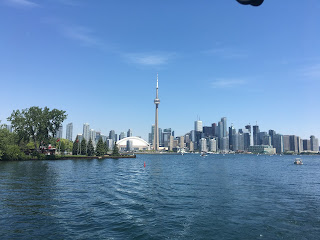 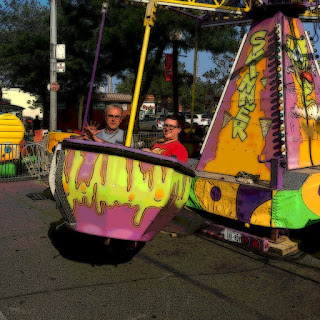 He was "done of" looking at waterfalls, but he had fun.

#TravelingWithDC - In Search of the Wizard

On our way back from Niagara Falls we stopped in the little town of Chittenango, the birthplace of L. Frank Baum. 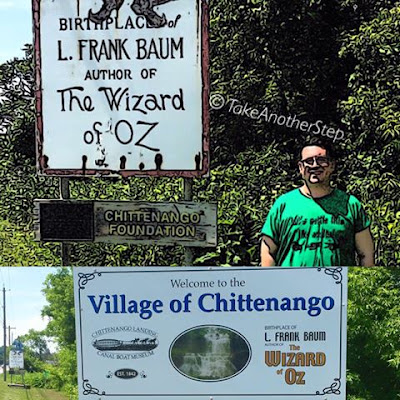 We have now arrived on OZ - the best part of the trip for DC. #TravelingWithDC — in Chittenango, New York. 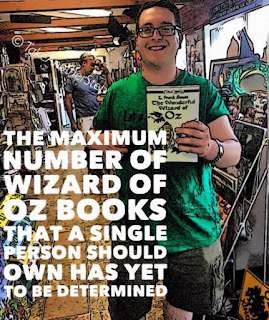 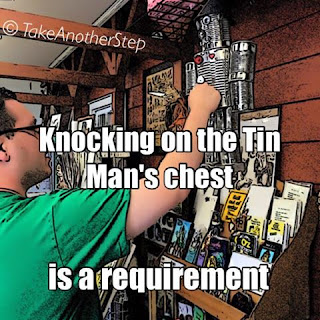 Knocking on the Tin Man's chest (or we would not be able to leave the place) - he just HAD to.#TravelingWithDC 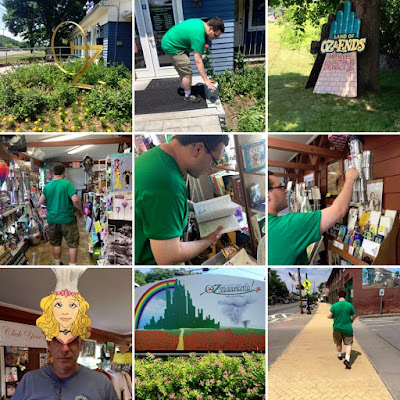 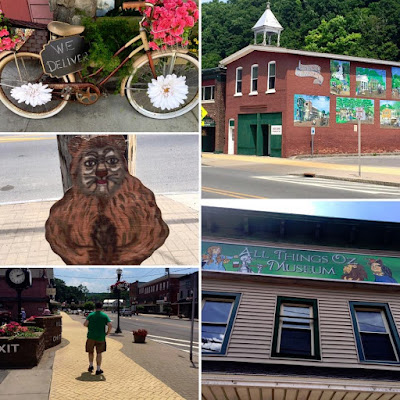 Even the casino was OZ themed... 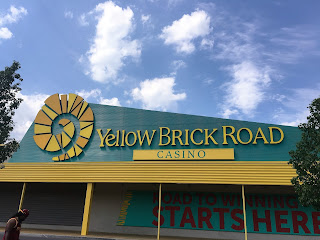 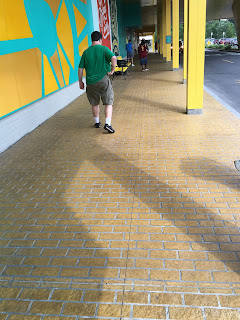 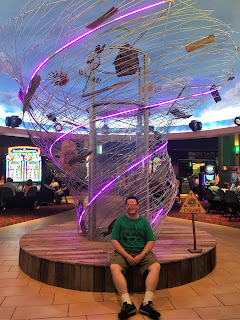 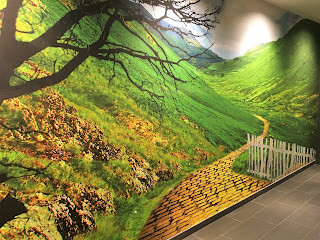 The museum was closed but one of these days we will get back for the OZ Fest in early June.

Posted by Vickie at 9:59 PM No comments:

© Take Another Step and Taking a Step at a Time - Autism, 2013 - Present. Unauthorized use and/or duplication of this material without express and written permission from this blog’s author and/or owner is strictly prohibited. Excerpts and links may be used, provided that full and clear credit is given to Vickie C. and Taking It a Step at a Time - Autism with appropriate and specific direction to the original content.