“Penny” is in the house! NY Comic-Con

This year we decided to forego our annual October/Halloween weekend in Salem to attend NY Comic-con.
October… Costumes… it qualifies.
This was our very first “Con” and me, in my infinite wisdom, decided not to start small. Nope…. New York City…. Huge…. Mega Crowds…. but I have to say that it really went well.
Even though we would be in the city for the entire weekend (New York City is DC’s favorite place in the world) I opted for just the one-day/Saturday ticket. I knew that being in New York and not walking around the city and the crowds that I was anticipating would not make for a very happy guy. If this was a bust with DC at least there would be the bright spot of spending the rest of the weekend visiting his favorite places – Hard Rock, Central Park, Toys R Us, The Eloise Store in the Plaza and the Hershey Store.
Since most of our day was posted on my Facebook page, I am going to take the easy way out and just re-post those posts – they say it all anyway….
Once we made it through the crowd outside (pictured above) we headed to the vendor floor – the autograph/photo-op room was not open yet. DC wanted to see Felicia Day and only Felicia Day – but first; the vendor room.

Just as we were making our way out of the vendor room because of the crowds, we happened upon Mike Tee-Vee. The real Mike Tee-Vee. Talk about a find! DC was so happy! If we had walked down a different aisle we would have missed him. Fortunately it was early and not too many people had happened upon him yet so he was able to take his time with DC.

*****
Waiting in line for Felicia Day.  He had waited almost an hour and just as I thought he couldn’t take it anymore, she came out. She came out 20 minutes BEFORE her scheduled time. It was still another half hour before we made it to the front of the line but just seeing her up there kept him focused. Can’t love her more for doing that!


Some illegal photos Doug took while we were waiting.. until he was screamed at by the staff, that is.

****
DC with Felicia Day… She was wonderful. She held his hands and asked him which Dr. Horrible song was his favorite. (He was going to wear his Dr. Horrible costume, but changed his mind at the last-minute which was probably for the best) 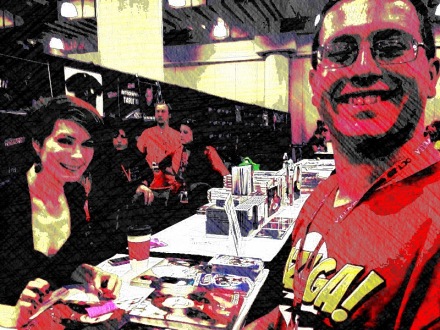 DC loves “Penny” from Dr. Horrible but he also knows her from “Erica” (Eureka). He was thrilled. She let us take a picture even though we were not supposed to (as much as he loves her, I just could not make him stand in another line for a photo-op with her)

I picked the only panel I thought he would enjoy – the Once Upon a Time, panel. Even with the appearance of surprise guest “Emma” (Jennifer Morrison), DC fell asleep about 10 minutes into it – I tried….
There is a Walking Dead panel later today that I am dying to go to, but … yeah… that’s not going to happen.
*****

Lunch: Pretzels on the floor. The pretzel line was the only manageable line for food we could find. If he was not looking forward to dinner in the city later, THIS would not have gone over well at all. – *Note to self

*****
I told myself all day that I would not spend the money they are asking for William Shatner’s autograph. Well, I caved. How could I attend my first Comic-Con with William Shatner in attendance and skip him? DC does know him of course because I am his mother. I was nervous but William Shatner was nice to him. We were not allowed to take photos (and no, I was NOT going to pay for a photo-op), so this was the best we could do. We completely forgot to tell him that DC shares his birthday!

Ready for dinner in the city…
Posted by Vickie at 10:34 AM No comments: