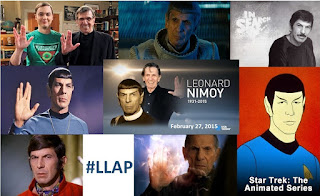 RIP SPOCK
spock!?!? I'm
in shock!
mr. spock through
the years
it is illogical to
discuss the
color of a dress
when one who has
defined a race
of people
who introduced
space travel to
humans has
departed us
thanks for the
memories mr. spock.
you will be missed.
live long and prosper.

If you were to ask DC about his trip, any trip for that matter; you would probably hear about what he ate and the bookstores he visited. Unless he met a Disney Character, saw a show, or visited an amusement park,  food and books are all you are going to be told about.Below is a collection of Facebook statuses and photos from our recent trip from DC's perspective - or maybe from my perspective of DC's perspective - either way, I know that these were the highlights for him.


I was nervous the first time we took DC on a cruise, but my worry was for nothing.
DC's third cruise was a little more difficult then the others but he sucked it up eventually and had a good time.

The sail away party 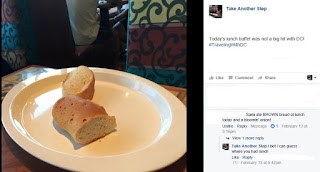 The food, believe it or not, is always a problem... 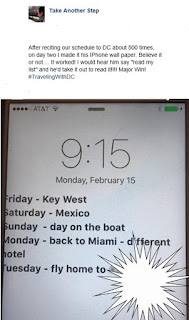 The schedule! He had to know the schedule - over and over again. 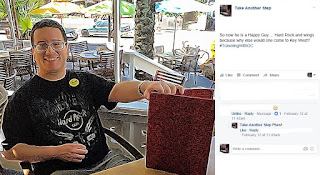 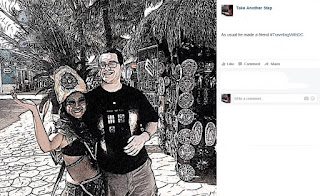 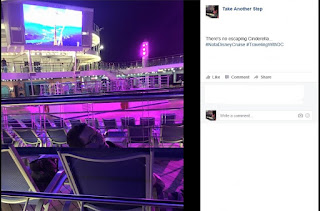 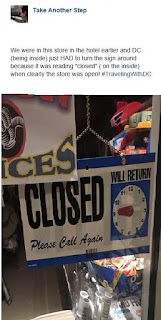 Back in Miami -  and a tornado warning. 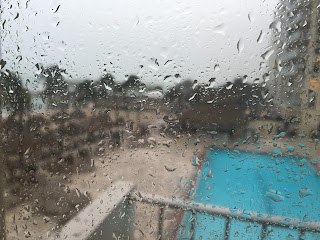 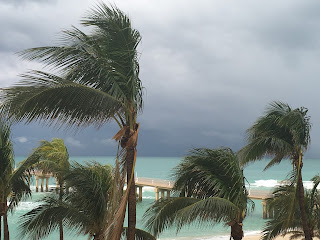 Fortunately I don't think he was fully aware of what was happening. I'm sure he wondered why I locked my self in the bathroom with him... 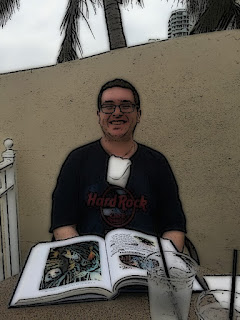 It was over as fast as it started, the sun was out and time once again for wings...

Posted by Vickie at 6:47 PM No comments:

'Bushwacked" by the Ipad

“You can’t stop the signal, Mal”

“Everything goes somewhere, and I go everywhere” ~ Serenity

*Firefly ~ Bushwacked
Posted by Vickie at 10:32 AM No comments:

You may (or may not) have noticed that I use quite a few song titles, lyrics or variations thereof as blog titles. I do this because music is always the first thing that pops into my head when giving a title to a blog. Once it is in my head, it’s there and even if the actual song has nothing to do with the post itself, I have to use it and I have to type it the way I am hearing it in my head.”
These, along with the Short Story ‘Series’ are the posts that I put together and save for the times when we are away or when I just do not have time to write. “Fluff” or “Filler” – let’s call them. I have fun with them anyway….

Those trees will get you everytime

I know that I have written more than once about DC’s inability to communicate to me or anyone else if/when something might be  wrong. There have been very few times that he has actually volunteered information to me when he was not feeling well or when something hurt or was bothering him.
Most of the times when he does communicate a problem to me, it is really just a ploy to cover himself in Band-Aids:


DC: “Mom, my leg is killing me.” (there was nothing wrong with his leg, I checked)
Me: “What happened to your leg?”
DC:”I broke my leg.”
Me: “How did you break your leg?”
DC: “Tree branch. Ouch!” (we are in the house)…
The lengths that he will go, to plaster himself in Band-Aids.

A tree branch seems to be the number one culprit in many of his injuries. This leads me to believe that at one time or another a tree branch was indeed the reason for an injury. When? I have no idea, but once he comes up with an answer he likes, it usually becomes one of his standard answers.
More often than not the answer I get is Nothing ‘wong’ or Nothing happened. Although DC never really gets cuts or scrapes – which I assume is the reason for his obsession with Band-Aids and really is not what I’d call accident prone, he does always seem to have an odd mark or “spot” somewhere or another. These “spot” mysteries oftentimes take a good amount of time for me to figure out. He is not always a big help in that area.
There was the one time that he came home from his senior class picnic with a red mark (scrape, but not really band-aide worthy) on his arm. When I asked him what happened, he told me that his IA (Para, to some of you) Mrs. G. pushed him into a bush and he fell down. Now, if I were a more paranoid person (hahaha, who am I kidding, we all know I am) I would have believed this because He Was Actually Telling Me Something, but I have known Mrs. G for years so his explanation did not hold water. Of course I did not tell him that I didn’t believe his story because: 1. He actually told me something and I didn’t want to discourage him from doing so in the future and 2. I assumed that he probably really did fall into a bush and Mrs. G was there to help him out. ~ It’s all in the translation. I spoke with Mrs. G the next day and yes, my version was correct.
Or the time that I noticed a large quarter sized mark on the side of his leg/hip one morning before camp. I could not for the life of me figure out what happened. He was offering no information at all. I asked the camp nurse to take a look at it. She did not think it was any kind of bug bite (I am always concerned about bug/tick bites when he is at camp). I asked DC again what happened he just kept saying “swing”
“Did you fall off of the swing?”
No, swing.
“Did you get stuck on something on the swing?”
No! Swing (he was beginning to get upset – so I had to stop because if I ask too many questions he thinks he is getting it wrong and changes his story).
After thinking about it for quite some time, I realized that he was actually telling me what happened. It was the swing. DC loves the swings at camp. He will spend any free time and all of the outdoor rec. portion of his time on the swings. He is a big boy. The swing was rubbing against his hip every day, causing something that resembled a very large healed-over blister. Once I figured it out, we just kept it covered with Band-Aids, so as not to cause so much friction. This was one of the very few times where Band-Aids were applied for a legitimate reason .
Then there was the big stripe down the side of his neck, which is a regular occurrence now, but the first time I noticed this mark, it scared the life out of me.
“Oh My God! What happened?”
“Tree branch”
He was in the car with me all day. He did not come in contact with a tree branch. Once again, it took me a while to figure this one out. When we are driving he rocks back and forth in his seat with so much force that it shakes the whole car (very distracting to the person driving). Because we had been driving so long, the seat belt was rubbing against his neck with every rock for a good long time, causing this large red stripe down the side of his neck. I do not think he even felt it. I have always believed that he does not feel pain the way we do or he does not process pain the way we do.  This and the fact that he is not always able to communicate what might be going on is and will always be a huge worry of mine. Verbal does not always mean communication.
Last week, I noticed a mark on the back of his leg. I asked him what happened. “Nothing happened”
He hates for me to look at these things because he is afraid that he will have to go to the doctor. After a lot of back and forth and ‘egg – guo – ing’ he let me put some anti-bacterial cream on it and he went on his way. He brought it up again the following day on his own as his way of apologizing for giving me a hard time the day before. “Feels much better now, Mom! Thank you! Thank you!”.
I asked him again what happened and he rattled off a list. I am sure the answer may be in there somewhere if I think about it long enough – and then again, maybe not… one never knows.
“The swing” (which would have made perfect sense as it looked similar to the swing injury –  if he had been on a swing.)
“A rock”
“A spindle – ouch” (my personal favorite)
‘The chair”
“Tree Branch”
So…..
Sometimes I do get the answer I am looking for albeit in a round-about way,
and other times…..
I am just left with a tree branch..
Posted by Vickie at 10:28 AM No comments: