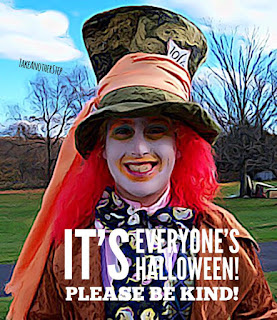 DC always enjoyed the costume and candy part of Halloween, but it took years before he really understood the waking around to get said candy and years after that before he understood that he could not walk into people’s houses.

He could not understand why we were ringing the doorbell and not going in.

Halloween, now is his absolute favorite.

He has a costume for every party and another for the big day.

I don’t feel that I should have to take that all away from him because some people see him as “too old” to trick-or-treat.

Like many children and adults with autism, his interests are limited and when he really shows an interest or enjoys something out of what would normally be thought of his “comfort zone” - you better believe that we are going for it; all the way.

Please be kind if an adult in costume comes to your door, or a child without a costume due to sensory issues.

Their parents will handle it if they try to walk into your home or don’t understand “take one piece” - Not having the ability to say “Trick-Or-Treat” is okay too......really. Don’t try to force it.

It IS everyone’s Halloween. #Autism #Halloween

Tuesday is the new Monday 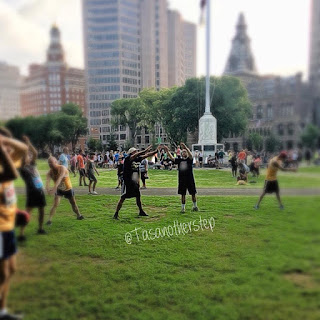 Never in a million years could I ever have imagined that DC would actually LIKE Unified Sports, Cross Country.
Never.

I can't even tell you how many years he has been participating; I have to imagine it's been quite a few (Ms. "No Sense of Time" at your service)

I originally tried it with him because all of the other sports he participated in had either gone away, he aged out of or he just got bored.

He aged out of Challengers baseball at 21. Not that he was a huge fan of baseball but when he was young, there were really no other programs - sport programs or recreation in general, for him to participate in, so he played baseball for 16 years.

He really enjoyed Special Olympics Swimming and participated there for a good 10 years, if not longer but that program went away in our area.

He also participated in Special Olympics Golf, but he was too slow to play "Alternate Shot", where an athlete and a buddy pair up on the course so he participated in the "skills" program.

10 years hitting balls on the driving range with no chance to compete on the course just got boring for him. I don't blame him.

There needs to be a level in-between "Skills" and "Alternate Shot" - just sayin'.

With nothing else to try, we decided to give Cross Country a shot. If nothing else, it would be good exercise.

Well.... he liked it and has been participating ever since.

This year, though.....
This year, he went from liking it to LOVING IT. So much so that he gets very upset when it gets cancelled.
Unfortunately, we've had a rainy go of it this season.

It’s 6:00 am and this “boy” has been following me around, asking about practice (which is about 12 hours from now) and just staring at me  for the last 45 minutes. As I type this, DC is about 6 inches from my face - staring.

He woke up and started immediately.
He won’t understand that I will not know if cross country will be cancelled for rain until later in the day.
I’m thrilled that he loves cross country as much as he does (who could have ever seen that coming?) but the downside is the anxiety about cancelling from the moment he wakes up every single Tuesday.
Tuesday seems to be our new Monday

Tomorrow is Tuesday and for the first time in 4 weeks there is no rain predicted.

Although he is getting so used to it raining and his practice getting cancelled that he will probably be in my face about it anyway .... fingers crossed, people!
#TuesdayIsOurNewMonday
#StopRainingInTuesdays 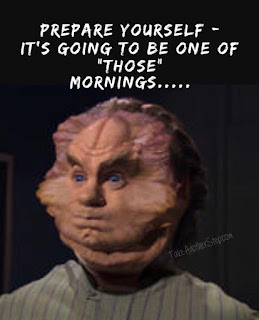 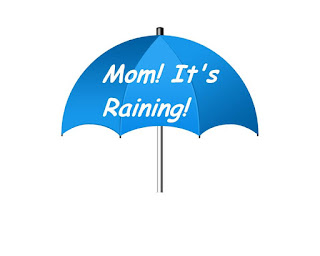 DC was ready at the door wearing his raincoat (me? no. I wasn't going outside yet).

When the car arrived, he ran out and I stood in the door as always.

I saw him flagging we to the car, which he never does. Thinking something was wrong and not wanting to waste time looking for my umbrella, I ran to the car as I was. Opening the door, DC said
"Mom! It's raining! Sorry!"
(of course he let me stand there in the pouring rain for a little while before he came out with that)
... Happy Tuesday!

~  Not that he had any idea what violated means, but hearing it come out of his mouth - unsettling, to say the least.

Today, is DC's Monday
Mornings in General are hard, but Mondays usually do me in.
Today was not going badly at all but waiting for his transport, I could see the mood change sweep over his face. I know it was because he wanted to write more "Princess Papers" and I did not give him enough of a heads up to put everything away.....
Fortunately, even with the angry eyes, there wasn't a big outburst; but he was agitated.
I am sure that the driver at this point is able to tell his mood by the way he walks out to the car when it arrives.
When he turns around to look at me BEFORE he gets in the car, I know he's coming back to the door to me to stim about whatever is bothering him. Some mornings he comes back more than once.
Today he got to the car door, turned to look at me and stomped back to me still standing in the doorway - angry eyes and all. I opened the door and he yelled angrily "Not 'Crappy" anymore!!!" (crabby) and stomped back to the car.
Not very believable, I must say.... but..... it didn't go on forever and he went right back to the car, so I am putting a mark in the "win" column. Happy Monday (Tuesday)! 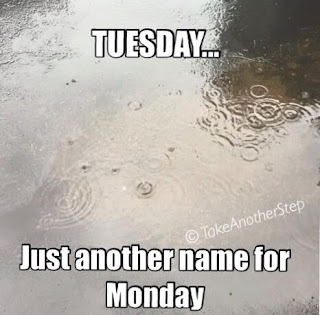 Tuesdays are really just Mondays all over again..

Posted by Vickie at 6:33 AM No comments: