A Few Facebook Statuses and the excitement around Thanksgiving.

Have a Happy Thanksgiving everyone!


We were away for the weekend which was all I heard about during the weeks beforehand.

In the car on the way home, Thanksgiving kicked in:

"DC: Mom I am so exciting for Fanksgiving - 'We are planning the greatest celebration ever' ~ Lumiere #ItsWhatsNext #DisneyLinesThatFit

(understand that you are getting the condensed version - in reality 'Fanksgiving' talk and reminders came all day, every day)

All Week at random intervals

Dc just walked in the door. He's no longer talking about 'Fanksgiving' - he has resorted to just pointing at the date on the calendar until I confirm... One......More......Night of this and it's over until he finishes eating tomorrow when he will move on to "going home on Friday" and then on to Christmas is coming soon 24/7


"To the people" Happy Thanksgiving from DC and me. He'll be having Turkey (a leg, because..... bones - there must be bones) a 'roll' of bread (or a loaf of bread) and pumpkin pie!

(Pumpkin pie being something he thinks he is supposed to say; he opted for the chocolate cake) 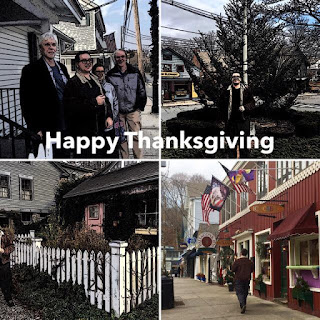 
We arrived home less than a half hour ago...
"Mom! I am so exciting for Christmas is coming soon!"
#ItsWhatsNext


Hope you all had a very happy holiday!

This blog is generally used to copy my posts (as back-up) from my official site and also for longer facebook statuses. Please visit my official blog site at: Taking it a Step at a Time

Posted by Vickie at 3:06 PM No comments:

The Election and a Parenting Fail

Like most of you, I was up most of the night. I stayed up until the bitter end.

This morning DC asked me if I was happy, which is something that he does often - he wants to make sure everyone is happy.
But he kept asking... so I tried to explain the election to him.
Because I know there is a lot more going on in his head than he can communicate, I always do try to explain everything he seems to have a question about. I do try to explain elections, the president etc every time they come around. Usually he is with me when we go to vote. I don't know how much he understands but I always try to explain.
I started by telling him I was disappointed (I did not want to say that I was not happy as that just upsets him) about the election. I was not going to go into great detail, I was just going to say that I was disappointed because our new President is not always a very nice man. Instead I  proceeded to burst into tears just trying to explain it to that beautiful innocent face looking at me.
I should have waited to talk about it. I did not realize I would get that emotional. It was not my intention to present it that way to him.
We will have a lot more talking to do .......
I did get a big hug and a "Don't be sad, Mom" i thanked him for making me feel better so here's hoping that he won't be worried or nervous.

This blog is used to copy my posts (as back-up) from my official site and also for longer facebook statuses. Please visit my official blog site at: Taking it a Step at a Time

Posted by Vickie at 9:49 AM No comments:

Yesterday I was informed many times that we were "out of 'abanas'". If you follow this page at all you know this always seems to be thing. Yes we are out of bananas quite often because bananas are not something I can buy in large quantities ahead of time and save. They go bad too quickly.
So.... we are out of 'abanas' a lot. It can't be helped.

Yesterday, we also had to attend his Best Buddies walk and I made the mistake of telling him that we would stop at the grocery store on the way home from the walk.

That was all he could think about....

He had a good time walking but as soon as the actual walking part of the day was done, he wanted to leave. He wanted to go shopping. His Buddies and I talked him into staying a little while longer and he did allow himself to have some fun.

They decorated a pumpkin. They went on a hay ride. They danced to the music. Even though he was having fun, he must have mentioned "shopping" to his buddies, more than once. I am sure he made it sound like we would be shopping for something very important - like a car or furniture.

One of his Buddies asked me what we would be shopping for since DC was so excited about it.

Imagine my embarrassment when I had to tell her that this big exciting  shopping trip was just to get  groceries and yes, he gets this excited about grocery shopping all of the time.

I swear this child is not starving......

For more on the 'Abana' battles:


Last night, DC came home from his after-camp program and gave me a hug. A few minutes later when I was standing at the kitchen counter, he decided he needed another hug. Not all that weird, he loves hugs but he just had one just a few minutes earlier. While he was giving me this second hug he saysMom, we are out of 'a-banas'. Apparently I was blocking the corner where the bananas are kept and he needed to give me a hug so he could see behind me. #OutOfBananasAgain#IReallyHaveToLoseSomeWeightIfPeopleCantSeeAroundMe

DC is at a party with his Dad today (and might I point out it is Sunday and yes, there is cake) - While I was in the grocery store, his Aunt (His Dad's sister) texted me a few photos of DC at the party. Since I was in the store to get his bananas, I decided to text her a pic so she could tell him that I have them, so he didn't have to worry about his 'a-bannas' any more....DC has radar. He knows when I have been shopping even if there is no evidence left out to indicate that I have been to the store - he just knows and instinctively starts going through cabinets, the 'refig-a-lator', and freezer to see just what is there for him.
He is so good that one day I hid something in a cabinet; one that I never hide things in and one that he never goes in because it has the glasses that he doesn't like in it. But he came home with his staff, Elizabeth and went directly to that cabinet and found what I had hidden. Elizabeth just stood there with her mouth open in disbelief. He's THAT good.
I am sure he will still do some inventory when he gets home but knowing that the bananas are here might make it go a bit faster... 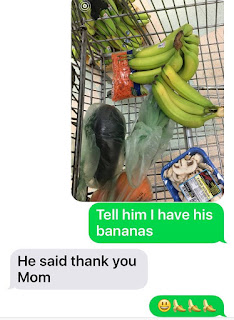 A few times that I have dropped the ball... 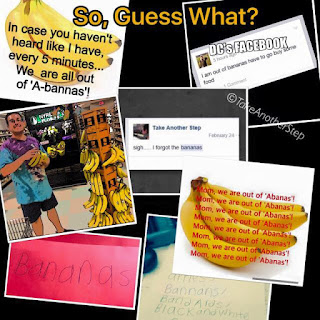 All questions are usually answered with a "Yes" 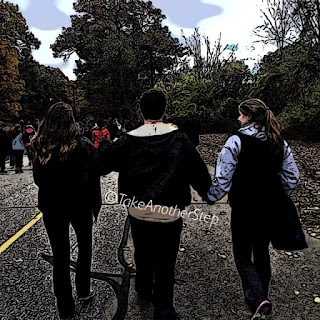 I have said many times before that although DC is verbal, communication is difficult for him.

There are times when he just does not understand the question. The concept of who, what, where, when and how is difficult for him.

There are times when he is just too distracted and gives a random answer to a question.

There are times when he is just tired of the questions and will say anything to make them stop.

The one constant with DC is that just about every question is answered with a "Yes" and once in awhile a "Great!" the first time the question is asked.

Questions almost always have to be asked more than once to get his attention, but asking too many times leads him to believe that he has gotten the answer wrong and will change it. It's a thin line.

Therefore it is always really hard to determine which if any of the answers he gives are correct. 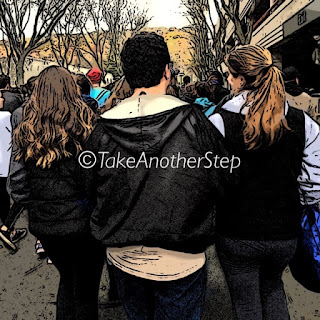 
Buddy: what kind of pets?


Buddy: Do you play football?


Buddy: are you a quarter back?


So pretty much, she learned no new information at all about DC and what she did learn was pretty much entirely made up. 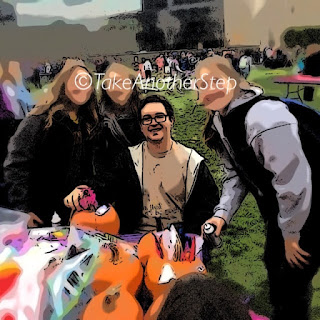 
This blog is used to copy my posts (as back-up) from my official site and also for longer facebook statuses. Please visit my official blog site at: Taking it a Step at a Time

Posted by Vickie at 9:39 AM No comments: