Plans and the weather 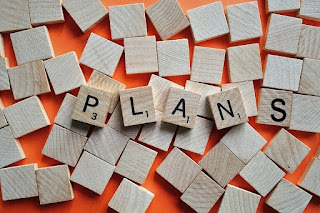 DC has big plans for tomorrow. Tomorrow is his scheduled 6 month IP (no E, he’s out of school) review. Although he does not in any way enjoy attending these meetings, he is excited because he knows that after the meeting I can stay and have lunch with him in the program’s restaurant. Friday is also, library day. After the library we are supposed to have dinner with his aunt and uncle - which he is also looking forward to. Now we hear that there is some sort of “weather” on the way for tomorrow. How much weather - we don’t know because I am not allowed to watch the weather, due to his belief that watching the weather actually brings the bad weather.
In-between pacing and asking me over and over again about the meeting, lunch, library, dinner (to which I cannot give him definite answers) and opening the door to look out and yell “snow go away” (it’s not snowing) he is also announcing
“ My ‘twenty-seventeen’ birthday”. He just flipped the calendars this morning to March so he’ll be announcing his birthday to me all month. #ItsWhatsNext- He has a lot on his mind tonight. #Help

*****
The Following Afternoon after hearing about the weather, the meeting, lunch and dinner all morning before his transportation arrived, Facebook Status

Last night I posted about DC’s plans for today, the weather, and his growing anxiety over all of it. So far it is just wind and lots of rain so his program and meeting did not get cancelled (although I did have to avoid tree limbs in the roads all the way there and there still is a BIG threat of the power going out - which hasn’t occurred to him yet.... we’ll cross that bridge later I’m sure).
When I arrived he was still out of sorts and wigging out over dinner (he was no longer concerned about lunch because I was there, so he knew lunch was on).
We were waiting in the conference room for his case manager who was late (did I mention that DC HATES these meetings???).
His case manager arrived and for some unknown reason did not notice that DC was upset right away (???) and began asking him questions which only made him that much more upset.
(Note: When DC is upset he will generally answer any question with the last thing you have said)
Finally he realized DC’s anxiety and asked:
“DC is something bothering you?”
DC: Yes!
CM: What is it that is bothering you?
DC: You!
(I am the mother so I am not supposed to laugh..... but I did) 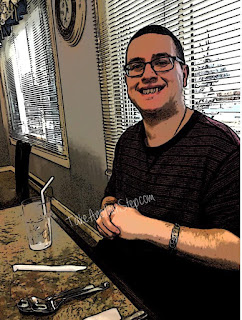 The photo is of the finally calm and happy DC having “lunch with Mom”
-------
Now let’s all join hands and hold our breath for dinner and begin praying to the power gods, please. This wind is getting scary.

aaannnd .... the lights are flickering.

Apparently his program lost power sometime after I left, but he had library and dinner on his mind so believe it or not, it was not the first thing he said when he got home! (Progress??) 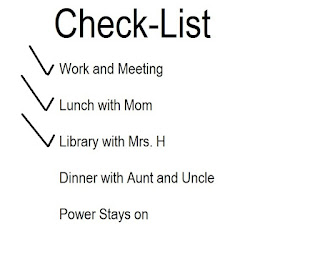 (I am left-handed, in case you might be wondering) 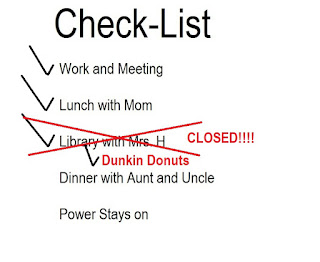 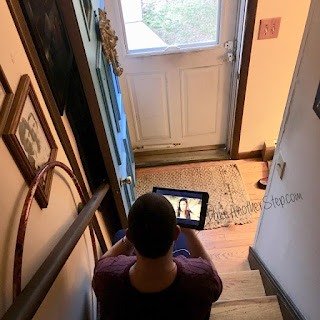 As much as storms and wind frighten him, he seems much better when he is able to watch what’s going on. Due to the high winds I wouldn't let him go down to the garage and watch with the garage door open, he decided to take position on the stairs in front of the front door.#Whateverworks (dinner is still on, so far)

For those who may be new here: I do not normally post this many times in a single day -
Now, moving on...We were able to go to dinner with his Aunt and Uncle (can you say, Phew?). He even received a few early birthday gifts. 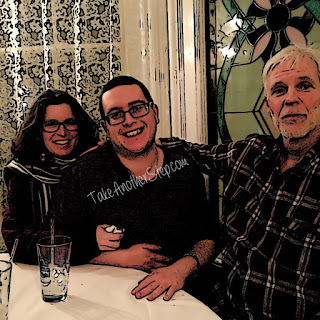 (The photo is of the finally calm and happy DC having his highly anticipated dinner with his aunt, uncle and Mom)
As expected, with dinner being out of the way, he is now perseverating on the wind and the power going out. I made the mistake of saying “So far, so good” and due to that error in judgement, I will be hearing that phrase in my sleep tonight. #SoFarSoGood #StillPrayingToThePowerGodsThe wind has actually died down considerably, but he’s too far into “storm mode” to hear any of that.

*****
Later at home
All plans for the day have been checked off his list (in one way or another). Now it is time to devote his full attention to the storm, which in reality was not a storm anymore - it wasn't even raining.

Mom, so far, so good
Mom, I am brave
Mom, wind go away
Mom, look out the door

Mom, so far, so good
Mom, I am brave
Mom, wind go away
Mom, look out the door

Mom, wind will be over tomorrow

Edited to add, because how could I forget...

Ms. (Lastname), the wind will be over tomorrow. (He skipped right past "Mom" and "Vickie" and went straight to addressing me formally. I don't know why. He calls me Vickie quite often because he has been told and is aware that he is an adult and he decided that he should be using my adult name. I don't know the reason for the Ms. - :) )

Finally it was time for bed.
He did wake me up twice which was an upgrade to the 4 times he woke me up the night before - so ... progress.

*****
Morning came - the sun was out. The wind had died down to next to nothing.

WE DID NOT LOSE POWER! 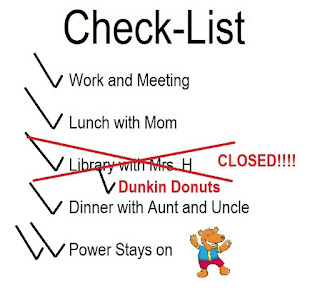 *****
This blog is used for shorter posts, off topic posts, for longer Facebook statuses and apparently complaints about dentists and doctors :) . Please visit my official blog site at: Taking it a Step at a Time