Speech and Wrapping His Mind Around a Single Word 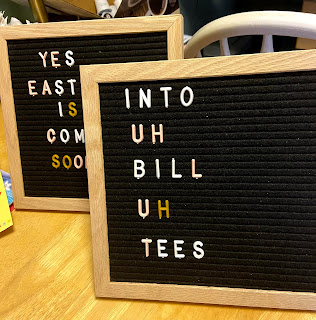 DC was assigned a line of dialogue to recite for his Winter Guard team Zoom show.

I say a line but actually it was only two words.

"Into
Abilities"
And… he could not say Abilities; not for the life of him.
In order to get him close to the word, I tried putting it up on “the board” (you know… the board I bought to keep him from reminding me hourly of everything birthday related) and I tried to sound it out for him.
Into
UH Bill UH Tees
Was my first thought.
I had to use UH instead of an A because if I put an A there, he would say the letter A and not the sound.
Then, overthinking as I do – I thought that maybe UH Bill IT Tees would sound better.
The more I went back and forth in my head, the more confused I got about which would sound better.
I went to my Instagram friends for assistance and put it to a vote, keeping in mind that he would most likely end up pronouncing the word as 4 separate words and that I was only looking to make it pronounceable for him and not necessarily closest to the spelling of the word.
The general consensus was the latter, UH BILL IT TEES.
We began practicing it that way, but we ran into a snag:
When DC used “It”, he automatically turned “Tees” into “Dees” and he could not figure out a way to say the word with the IT and still be able to say Tees instead of Dees. He just couldn’t do it.
That is how it works with him. There are some words, even simple words that his mouth/mind cannot seem to maneuver and then there are words that I am surprised that he can pronounce. There does not seem to be a pattern to it.
After days of practicing, we went back to my original thought; using the UH instead of the IT.
That seemed to work out better for him.
They recorded last night and I do believe people will know exactly what he is saying!
He did a great job!
And yes, he is very proud of himself... as he should be.
***
Even though this really doesn't have a lot to do with the pandemic, I am going to add it as Quarantine/Pandemic Diaries: Part 28.5, since he would not be reciting the dialogue if they were going to be having an in person, live show this year.
All Quarantine Diaries Here
*******************