The Day Program: Communication and Gloves 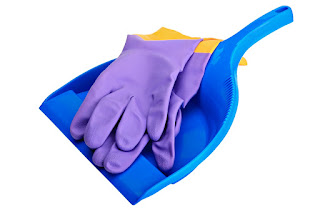 A few years ago, DC sprouted a rash on his face and the back of his hands. I realized that he had been at the dentist and because he liked the blue gloves they used, they gave him a pair. While wearing them, he kept rubbing his face. I suppose he liked the way it felt.

I took him to the doctor and was told it was an allergic reaction to the gloves (non-latex and hypo-allergenic). We did not know what about the gloves was causing the problem, but it was apparent they were a problem. He gave DC a prescription cream and in a few days, it was gone.

A few years later, DC came home from his day program with a glove shaped rash on the back of his hands. I called and spoke with his manager to explain the glove situation. He had never had to wear gloves there before, so it was not something I thought about telling them since it never happened again after the episode with the dentist.

I was told that he would be able to wear his own gardening gloves and when he went to work in a different department, the clear plastic gloves - which did not seem to be a problem for him.

A month later I got a note from someone in that other department, informing me that she was not aware of the glove situation and that DC had other gloves on that day but only for a few minutes. He was now wearing the clear gloves. (This was one of the many times that issues we talked about in our IP meetings, do not go any further than the meeting room).

After this last incident there were no more issues regarding the gloves and which gloves needed to be worn.

In mid-march of this year, DC came home with the same glove-like rash on the backs of his hands. I asked DC if he had been wearing gloves at work and he said YES.

Me: (Not wanting to ask a leading question) What color were the gloves?

Now, before DC went back to his program back in October and given the pandemic, I specifically asked about gloves. I was worried that they would be required. I was told that they were not.

I again asked about gloves and was told he would be wearing the gardening gloves or the "white" - which I assume are the clear, gloves.

When he came home with the red hands in March, I called his manager that evening so she would get the message first thing in the morning. I wanted to be sure that they did not let him wear the "purple" gloves and also so I could figure out if it was the gloves that caused the rash or if I should be looking for some other irritant.

When I did not hear back by the end of the next day, I called again and was told that his manager had not been in that day -(apparently no one else checks the voicemail; not the first time this has happened - trust me.)

Not knowing who else to contact, I emailed the director. I did not want him to go another day wearing the purple gloves.

She responded by telling me that she would take care of it by cc'ing my email to DC's manager's boss and she also gave me that contact email.

By this time DC had arrived home and the rash was worse.

I never heard from the manager's boss at all - ever.

But finally I did receive an email from his manager the following day:

"There have been no changes to the gloves, soap or cleaning supplies in <that department>"

That is not a reply. That is a non-answer. This does not tell me whether or not DC was wearing the wrong gloves by mistake or if he was even wearing gloves at all. It does not say, "there have been no changes to the gloves that DC wears". It is a vague, non answer.

Coincidently he has not come home with a rash on his hands since.

Tales From The Day Program - ALL