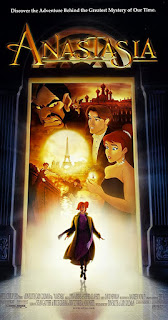 DC has always loved this movie, but more-so over the last year. I am not sure why.

Before we visited the tower, our first stop which happened to be right where the train in let us off was the Arc de Triomphe. Thinking that he would not be at all impressed with this because to him it was an arch, nothing more, I was surprised when he  recognized this arch – from Anastasia. I had forgotten all about that movie. I was kicking myself for not remembering it and looking into more Anastasia references before we left on our trip.

Yesterday DC needed to wear a mustache. He told me he was "Jim Dear". He put a different one on again this morning and told me he was "Mr. Disney". Then, I guess he decided he did not need his mustache today and took it off. He told me he was "Dimitri" (from Anastasia). #ThatWorks
#NoMustacheToday
***
July 2020:
DC is getting ready for Camp Music.
He has tortured them over the last two weeks by choosing songs from Anastasia. Not only is the movie 23 years old, but not being "Disney" makes it not as popular as some of the Disney choices he could have made. The only person who seems to know these songs is 'Par-ee-ka', the assistant director.
Hoping to get a different thought in his head before camp started, I asked him that maybe he wanted to suggest "Here Comes The Sun" (Beatles, but also Disney's Parent Trap) this week. I had to try to come up with something that is 1. Well known and 2. Known to DC - that seemed to fit.
DC: NO! Paris Holds The Key To Your Heart!
He already had his pick in his head and yes... #Anastasia.
#SorryDGroup I tried!
***
December 2020:
One of those accidental gift finds...
DC wants pretty much the same things all of the time (or something so old or obscure that I have to resort to eBay). It’s hard to find him something other than the regular things on his list that will really make him happy. He wanted an Anastasia book (he already has a few). While searching to find one that he didn’t have, I came across a music box that plays “Once Upon a December”, the song that he haunted his virtual camp music class with all summer.
Score!!!!!! He’s been playing it all morning!!!
I also found an ornament for him and one for Mrs. H as a reminder that she hasn’t had to read Anastasia with him since March due to the pandemic. #MoviesThatAreTwentyYearsOld
*******************