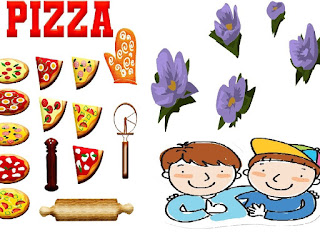 Since my venting post last week, things have been better. Maybe because I got all of my complaining out of my system - I don't know - but it's been better.

DC has moved up to cooking videos on YouTube. This is new. He normally watches nothing but clips of movies or songs that he likes.

So far, the cooking tutorials seem to all be about pizza.


I think he’s trying to tell me something....


After watching these videos, DC decided that he wanted to make pizza.

So no one laugh but I may or may not have mentioned that DC has been watching cooking videos on YouTube (mostly pizza making). He wants to make pizza (no I am not making dough - I don’t even have flour here as I don’t bake) - Doug went  and bought a pizza kit, containing dough, cheese and sauce but no instructions.

So how do I make this?

Listen, I need a package that tells me oven temperature and the cooking time to make anything. You can't just give me a kit and expect baking to happen! You just can't!
With a little help from my friends, we made the pizza the next day. 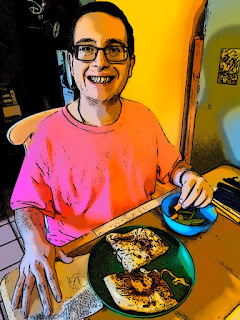 A few 'not so bright' spots of the week:

We had a Board meeting (virtually) on Monday and voted not to open the summer camp this season. It was a difficult decision but the right decision for the times. DC loves going to camp - even just the two days a week that he attends now that he "has a job".

DC got used to all of the cancellations when they happened at the beginning of the lock-down, but now some of the things that were rescheduled for a later date are also being cancelled for the year and it is sad for him.

The second cancellation this week was the PRIDE Parade that his Winter Guard team marched in last year and was scheduled to participate in this year. It was originally scheduled for June and then rescheduled for August. It too has now been cancelled for 2020 all together. Again... disappointing but necessary. 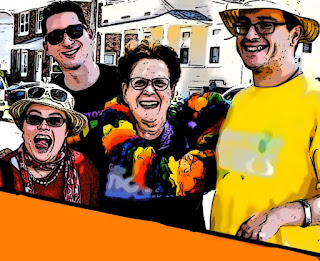 2019 Pride with the directors, his friend *Sally and DC

DC made a mouse mask for his next Story-Time Video with the mask kit that his Aunt bought  for him. 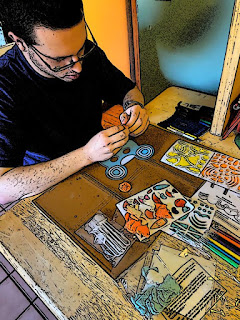 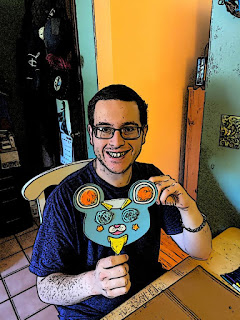 We started putting his Wizard of Oz garden back together.
We planted.
DC got his hands dirty (Yikes!) but he continued helping (more growth).
There are more pots to fill but we ran out of dirt, so we will continue working on it next week. 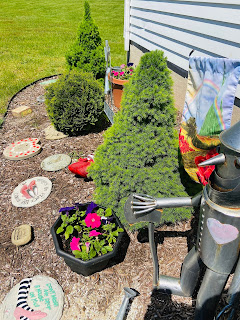 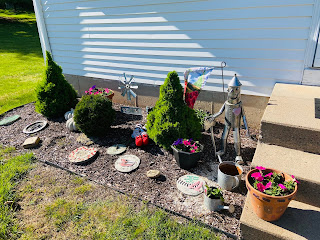 It will all look much better when the flowers begin growing over the sides of the pots.

DC's friend, BB and his mom came by for a quick front yard visit today. They brought DC his favorite “Black and White” cookies. 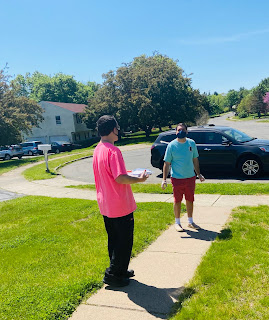 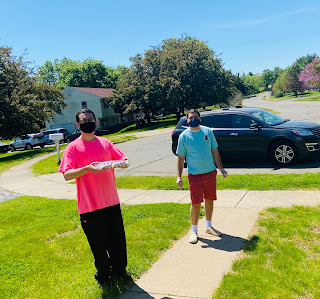 DC is really missing his friends.
This made him happy.

A few hours later, we were to attend "The Sabrina The Teenage Witch" virtual cast reunion AND a one on one conversation with the Quizzmaster (Alimi Ballard)

More about that in Part 11.

Tomorrow we will be my second attempt at cutting DC's hair. I think maybe I have the hang of it now.


It is difficult to explain “his” autism to anyone without resorting to 1000 examples and 1000 stories. So I tell 1000 stories to make clear that there are other sides to autism than the characters seen in TV or movies."


This blog is used for shorter posts, off topic posts and also for longer Face book statuses. Please visit my official blog site at: Taking it a Step at a Time