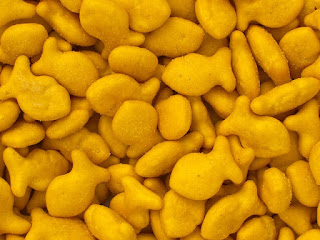 I realized that I haven't written anything since May.

There has not been much going on, but then again there has been a lot going on.

I don't know if that makes sense.

His day program began doing zoom meetings daily. At first, because they were new, he was interested in participating, but after 5 days of non structured/free-for-alls, he opted out.

DCs first zoom meeting with his day program. He made it through the whole thing 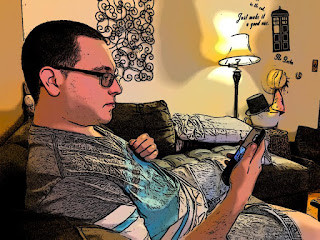 How many times does one have to answer "What have you been doing during quarantine?" and nothing else? It gets old.

I was amazed at how willing he was to get up and follow along as he was/is getting pretty used to "playing computer" or ipad.

What a great idea on this rainy day! DC doing his Winter Guard stretch/warm-up! 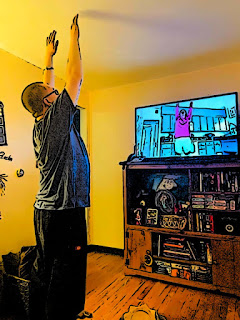 Speaking of rain....
We had a two week run of thunder storms almost daily. Just what we needed for the already anxious guy who has been stuck home for months.

“Vick-eeee, I’m getting very nervous about this”First clap of thunder and he’s positioned himself in front of the door so he knows when it’s coming, I guess. 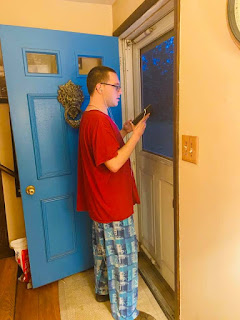 He’s positioned himself (with iPad) in front of the door watching for the coming storm (I don’t know why this makes him feel better, but it does) while insisting that there is:#NoStormToday 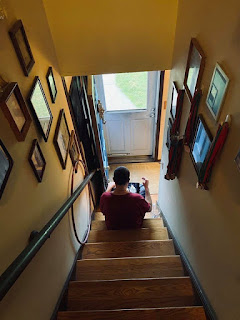 He discovered additional uses for his band-aids and scotch tape:

I don’t know what the problem is under that mass of band-aids and scotch tape, but he says his earbuds were broken.#1001UsesForBandaids 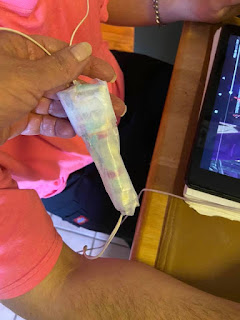 His "fix" actually worked but I ordered him some new headphones anyway.

DC, still drinking his orange juice from breakfast...“Lunch is coming soon”The time between the meal and asking for the next meal is getting shorter and shorter.

He's ventured a little further away from his "watch over and over again"  Disney and other favorites, but as we know - Everything Is (Still) Related:

You all know that DC is stuck in his own cycle of television shows and movies. When he does gravitate to a new show, it is usually because I am watching it (and as much as I don’t think he’s paying attention, it turns out that he is) AND he sees an actor he knows from one of his 100s of favorite movies. He never comes to them on his own. Over the last week or two, when he’s not watching Grace and Frankie or New Girl, I noticed him watching Arrested Development. I have never watched that - ever. I couldn’t make any connections in my head as to why he was watching it; I mean it probably would have helped if I had ever seen it, but I knew some of the cast. So I asked him.“Mr. Magorioum’s Wonder Emporium”I had to think about it for a minute, but he is correct.Jason Bateman.#EverythingIsRelated

Sharing took on a new spin:

Every day when DC opens his little snack bag of gold fish crackers, he comes directly to me and hands me 2 (only two) fish.Then he says “thank you for sharing” and moves quite quickly out of the room.He knows that it’s nice to share, but I guess he wants to be sure he gets the credit for sharing without really giving up any of his snack.

I was upgraded, downgraded and upgraded again.

Last week I was upgraded to THREE goldfish but alas, it did not last and I was demoted back to two. Today I was again upgraded to 6 (he delivered two at a time)! I have to imagine he is buttering me up for something! #ThankYouForSharing

I had a zoom meeting with his program too.

As you have read, DC has done a few things on zoom over the last few months. Other than setting it up for him and sitting next to him off-screen... I have not.
Yesterday was my first zoom meeting with his case worker and his day program, both of which I only ever speak to in person or on the phone. What I have to remember for next time is that they can see me when I’m rolling my eyes.😳

Another Holiday In Quarantine:

DC, grasping at straws (or trying to make the best of another pandemic holiday) made sure he chose the red, white and blue straws for his juice this morning. He put on the red white and blue beads he got at the camp parade last week and is now searching his 100’s of markers for just the reds and blues. It looks like he will only be writing his “princess papers” in red and blue today (between screeching “Happy 4th of July! Yes!” at random intervals of course )Happy 4th!

There are and have been times when I have forced DC to do something, only because he would never do anything but "play computer" if I did not. I like for him to at least TRY things to see if he will like them. If he doesn't, he doesn't, but I want him to try.

Watching a musical is one of DC's favorite things but....

It's not related to Disney ( I forgot about Mary Poppins Returns, which DC was quick to point out)

I wasn't sure he would get in to it.

He was not happy that he had to leave his iPad.

He sat down begrudgingly in the living room.

So it took until the girls came out with their “twirly” dresses for DC to get into watching Hamilton, but he is officially IN TO IT now.

He LOVED it. He was up dancing all the way through. I find him looking for clips on you-tube.
Sometimes Mom does know best.

The one and only thing DC was disappointed in about Hamilton was that they did not have the standard curtain call that he is used to (and loves). I have always said, if someone could come up with an entire musical made up entirely of curtain calls - he would be in heaven. I went searching to see if the one we saw was the norm.What I found.... The West Wing theme during the original casts' last performance (Lin-Manuel Miranda's favorite show, which I did know - which also happens to be my favorite show)

DC had a hard time with this one. He thought it was hilarious and wanted to do it, but he got so serious trying to get the words right that I asked him more than once if he was having fun. If he wasn't, we did not have to tape it. He insisted.#TheseAreWaysToHelpAtHome

*******************
In case you are new here: “I tell stories, most of the time; single individual stories about this or that. Some may be written with humor and some may come across as “Oh, look at the cute thing DC did or said” (he does crack me up at times) but my object is always to make people understand how his mind works, never to "make fun of him"
It is difficult to explain “his” autism to anyone without resorting to 1000 examples and 1000 stories. So I tell 1000 stories to make clear that there are other sides to autism than the characters seen in TV or movies."
This blog is used for shorter posts, off topic posts and also for longer Face book statuses. Please visit my official blog site at: Taking it a Step at a Time