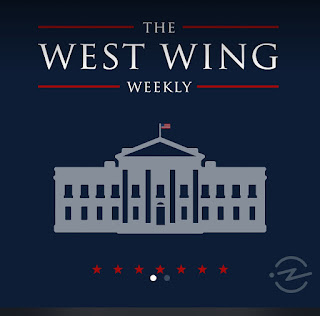 During the run of the first half of the season, I stayed away from news, groups, or any other info about the season and originally did not even watch After Trek (until I realized that I would not be getting any information there), because I did not want to cloud or confuse my opinions and I also felt it would be cheating (yes, I am just weird like that).

After we taped and published all of the episodes through the mid-season finale, and being the pod cast novice that I was, I wondered if there were any other Star Trek Discovery pod casts out there and I wondered if they came to the same conclusions that we had...

I started listening to a few pod casts since the mid-season finale and found myself getting very annoyed at everything they seemed to be missing or not picking up on because of course our (Moms Going Boldly) theories have to be correct. :)  - I did not get through any of them.~ From: "This Post is Supposed to be About #Star Trek Discovery (December 7, 2017)

Duh! There were dozens. As I said above, I started listening to a few but they really did not hold my interest. Not long after I wrote that post,  I happened upon "Discovery Debrief - A Star Trek Discovery Pod Cast" (I will give them a shout out here) and I really did enjoy it - I will give you no spoilers about their theories, but do check it out. I think I listened to it all over a two day period (maybe three).

Still living in my pod cast naivety;  not realizing just how many pod casts are out there, I remembered reading or hearing once that Josh Malina was doing a pod cast about the West Wing. I also remember his tag line somewhere (twitter, tumblr???) was "the guy who ruined the West Wing".

So I looked it up.

If you know me well, you know that I absolutely LOVE The West Wing. I watched it in real time when it first aired. I also watched it in reruns on Bravo more than one time through if I remember correctly.

Years ago, DC and I were in Borders bookstore, right around the time they were beginning to shut down all of their stores. Everything was 50 to 80% off. Now, you all know that DC and I were there for DC (Mr. Book), but I decided to go over to the DVD section just to browse. Sitting there, alone on a shelf, I found the last West Wing Full Series Box Set. The price for the 7 seasons was something ridiculous like $300.00 (truth be told as Netflix or streaming did not exist at that time, I probably would have been willing to pay that much so not to risk never being able to see it again - priorities!). There was really no indication of how much of a percentage I would get off on this box set, but I could live with whatever was assigned to it.

I still distinctly remember bringing to the register, not having seen the red "marked down to" sticker on the other side of the box and finding out that the 50% was taken from that. I ended up paying something like 75.00. I remember the cashier yelling "Sweet!" when the bottom-line price came up. I think he was more excited about the price than I was. 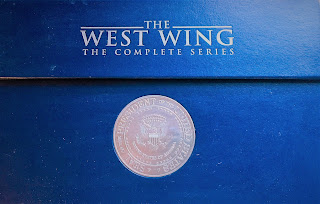 Then Netflix came around....

I cannot tell you how many times I have watched the entire series from beginning to end, not on a daily basis, but once I get to the end I just start all over again.

For example: DC, who really does not pay attention to much of anything that I watch (I was shocked a few years back when I realized he knew Supernatural - aka as the "Don't You Cry No More" Show). He surprised me once again when one day while I was watching an episode of NCIS, during a scene where Mark Harmon (Gibbs) was standing next to the flag in the Director's office, he looked up and said, "The West Wing". Mark Harmon did in fact have a three or four episode arc in the West Wing, which (fun fact) I believe helped get him the part of Gibbs on NCIS. DC must have been paying attention during that arc because, of course Mark Harmon was also in the Lindsay Lohan version of Freaky Friday - and, say it with me....... Everything Is Related.

A week or two ago I saw some sort of Netflix article stating that there was one single individual that had viewed a Netflix original movie "The Christmas Prince" more than 250 times. I wondered, if Netflix did in fact keep statistics on people's viewing habits, what might they be thinking about my obsessive watching of The West Wing?

There is nothing not to love about this show (especially these days). As for the man who ruined the West Wing? Not at all!  I loved Will Bailey. 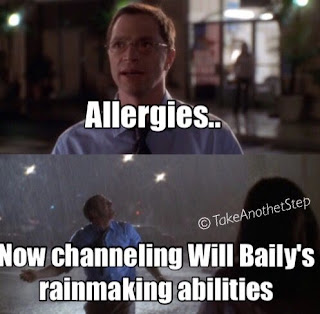 I was not thrilled with the character when he went to work for the Vice President and even less during the campaign, but I was glad he was still there. Before campaign and after campaign - I loved the character. I never looked at him as a "replacement" for Rob Lowe; he was a great character all on his won.

The show is a perfect mix of drama, comedy, sarcasm (which I love as I am fluent in sarcasm) and political issues - many of which are still relevant today.

The pod cast which by the way, is called "The West Wing Weekly" goes episode by episode. They provide a lot of backstory, they have guests from the show, politicians who either had something to do with the story lines that are being played out in the episode or providing information about other issues being discussed.

I listen in my car to and from work and pretty much all day at work; providing my West Wing fix while also drowning out all of the nonsense going on outside my office door.

I shared the pod cast information with my niece (also a fan from the get go) on Instagram and  another of my IG friends spotted the post and asked about it. She told me she had never heard of the series until a couple of years ago - WHAT???? But in that couple of years time she has already seen every episode at least 3 or 4 times (Netflix must have "files" on both of us). She was unaware of the pod cast, but is now listening as well.

The people at Netflix must now be very confused....

Update: I included The West Wing Weekly in a Finish The Sentence Friday Listicle and I suspect that they may have picked up a few more followers - including another person who had never seen the show before (again, I say "WHAT?!?!?") - She is now watching AND listening.

I did finally catch up and now I must patiently wait out the full week between new posts.


This blog is used for shorter posts, off topic subjects and longer Facebook statuses. Please visit my official blog site at: Taking it a Step at a Time