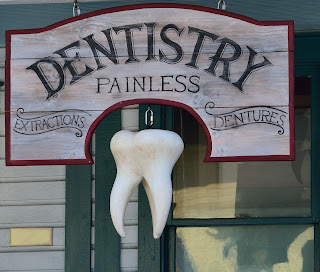 (off topic)
Last week, I posted a Throwback Thursday post on my face book page. It was about some of the ridiculous things, you know, things that make you wonder, that I had done over the last few years.

Reading it over and altogether, I resemble a walking disaster area, but they happened over a long span of time so it probably wasn't as bad as it appeared to be on paper.

While reading it over, I realized that there was a more recent "biggie" that should have been added to the list.

I am always willing to make fun of myself..

Before I tell you what I did, I have to give you some background.

I had a dental appointment scheduled. It was early so Doug had to come over to wait with DC for his transport so that I could leave.

It was a Monday and Mondays are generally hard for DC - harder over the past couple of years.

I do not remember what was going on but I was in near tears by the time Doug got here.

Before I left, I remember telling him:

"If they give me that (Insert Colorful Metaphor) woman again, I am just leaving!"

Well, I arrived at the dentist's office and she was exactly who they gave me..

(For some background about this hygienist - Read: Holy Inappropriate Conversations, Batman!)

Whether you read the link above or not, the bottom line is that I have told them for years that I do not want my appointments to be with this woman.

When I wrote the post at the link above, I had just gotten stuck with her for a second time (after telling them I did not want her any more).

There was one time that they assigned her to me that I was able to get it switched with another hygienist that was there (and not right in front of her) but today like the last time, she was standing right there and I couldn't/wouldn't say right in front of her that I didn't want her (maybe I just should have) so I said - I have to cancel and walked out with all of them staring at me.

It was a bad morning before I even got there and I am sure I am over reacting but I have told them so many times. It got to the point that every time I mentioned it when making an appointment, the receptionist would get really snippy and say "I know!". Well apparently she didn't know.

I just couldn't bring myself to endure that much pain while listening to cringe-worthy stories about her son today. (Facebook Status/Comment 7/18/2016)

So I left. Never to go back there again after 20 years as a patient. Maybe it was an over reaction but I think I should be able to book with who I want and not have to suffer at the hands of this woman. I hope the dentist did not have his heart set on that new summer house that I would have surely been paying for with all of my dental issues..... 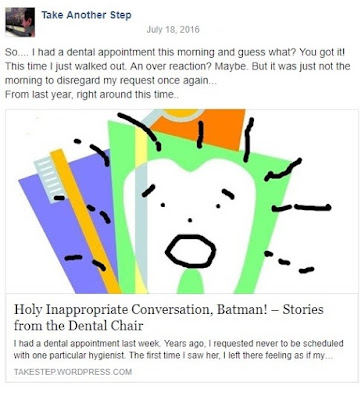 There were a number of other reasons that this office was already on the edge of losing me as a patient, like the time he did surgery on two teeth (apparently misunderstanding what my regular dentist told him to do) and in reality, one of them was supposed to be pulled. So I had to wait a few weeks until it healed for him to pull the tooth that he just did the "crown lengthening" (not sure of the proper name) on... you know; things like that.

Being upset before I even arrived there, you can imagine how upset I was after I left.

On the way to work, I tried to call my other dentist because I have had my teeth cleaned every three months for the last twenty years (a lot of good it does) and I was afraid of letting the cleaning go too long because something horrible was bound to happen. Note: Something horrible always happens anyway but one can hope...

I happened to get my friend, who works at my other dentist's office on phone when I called for the appointment so I told her the whole story. By the time I was finished and had an appointment booked, I was sitting in the parking lot at work.

Still all bent out of shape, I got out of the car and went inside.

I calmed down a bit during the day at work (those are words I would never have expected to be writing in the same sentence - Let me correct: I calmed down about THAT situation as the day went on).

When it was time to leave for the day, I could not seem to locate my car keys. I searched everywhere.
I emptied my purse, checked the staff room, my office and anywhere else I might have put them.

I wondered if I had left them in my car as I was not thinking clearly when I had arrived that morning.

I went out to the car, hoping the doors would be unlocked. It was July, it was HOT! I tried the door and phew, it opened. I stuck my head in to look for the keys and wondered why the inside of my car was so cold. It was HOT out.

Then I realized that I had not only left the keys in the car, but I had left it running, in the parking lot, unlocked, keys in the ignition, air conditioner blasting ALL.  DAY.  LONG!!!!!! A tribute to how quiet my car is, without a doubt.

It still had plenty of gas but I was a little bit afraid to drive it. I was imagining it blowing up or something because it had been idling all day long.

I shut it off, convinced that it would not start again, but it did. I got it home with no problems.

To this day (and this happened last summer) I have only told about 5 people that story.

It is funny to me now, but at the time I really thought I was losing it completely.

But now a year later I can see how this was all the fault of my former dentist.
That's my reasoning and I am sticking with it.

I do not seem to have a lot of luck with the medical profession at all.

But  don't you all just feel so much better about yourselves right now?

Glad to be of service.


******
This blog is used for shorter posts and also for longer Facebook statuses. Please visit my official blog site at: Taking it a Step at a Time