It's all about the 'Wea-ver'

The day before the latest storm - Winter Storm Chris, I believe it was called...


The first thing that DC said to me tonight was "No work tomorrow" - I don't know who told him that because his work has not been cancelled yet (many schools are already).
I had to explain that I did not know since we do not know how much it will snow. We'll have to wait until morning to find out.
Now he's standing in front of me staring at me because he says wants to go to work and I can't make him understand that I just don't know yet.
But... in DC-Land....

There are no grey areas.
"Maybe " is not a word.
"I don't know" is not an acceptable phrase.

This whole "work is cancelled" thing works much better for him if NO ONE TELLS HIM before it is official! It is  better if he doesn't know until the last minute.
Grrr!
(I suspect it's not that he really wants to go to work that badly - it's just that he knows that it being cancelled definitely means - "storm". )
#ItsNotNiceToStare
Facebook Status at Take Another Step

Work was in fact cancelled, but then then the "fun" began... 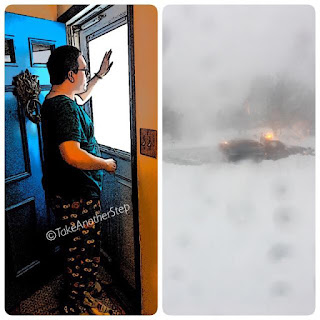 Trying hard to watch the first round of plowing through snow covered windows... while yelling "Snow go away!"
Facebook Status at Take Another Step 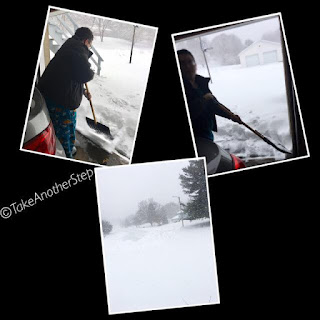 It looks we have a new snow day ritual.
First let me say that I have lived in New England all of my life and have never heard of "Snow Thunder" or "Snow Lightning" until today. The flash was so bright I thought there had been an explosion of some sort.
Now when DC is upset by a storm, I can no longer calm him down a bit by telling him there is no thunder and lightning in the winter.... (sigh...)
After that big blast of thunder and lightning - every time he hears a noise (I live in a duplex and unfortunately my neighbors are home kicking walls as they do - not helping the situation) we have to go down to the garage and open the door so he can hear that the noise is not coming from outside.
There's a shovel there so shoveling a few shovels full of snow is actually making him feel better - just a few though :)  :)
This was our 4th or 5th trip to 'Gerr-aaj' so far.
Facebook Status at Take Another Step

Coincidentally, it was four years ago that very day that we were trapped by Nemo

4 years ago today, we were into our 3rd day of being stranded in the snow.
I was beginning to lose it
On day 4 Doug and the neighbors actually started to try to shovel the street when the plow finally showed up. It turns out the town had us marked off as already done and had no idea we were all still trapped, being that their voicemail was full and no one was responding to emails. I finally had to call the police. 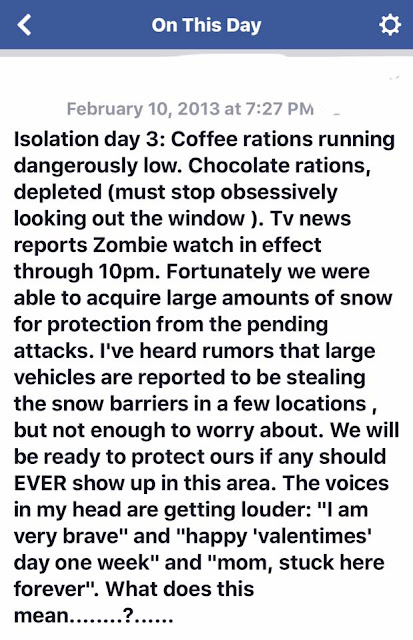 I guess it's safe to say that we "don't do weather" here very well..
We'll talk about thunder, lightning and losing power at another time....