Does everything really need to be this difficult? (From the Archives - August 30, 2013) 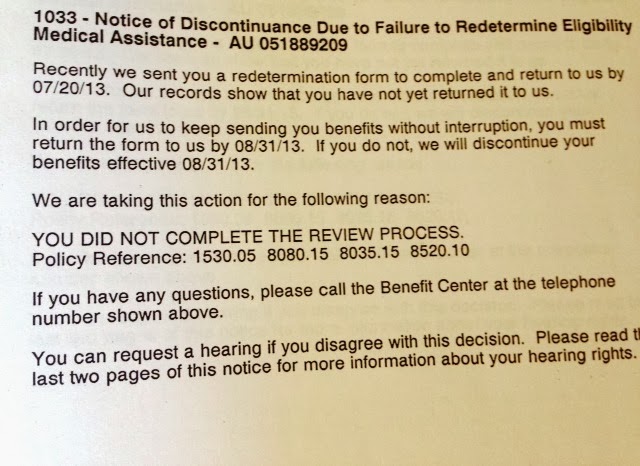 For those of you who don’t have a child with special needs or have young children and haven’t had to think about the “adult” side of things, here’s how it works here. I don’t know if it’s the same in every state, but this is the way it goes here.

When your child reaches the age of 18, depending on the severity of the disability (can he/she make decisions for themselves)  the parent has to apply for guardianship of their own child otherwise they will not have the ability to make decisions for that child. The state views them as adults, period, and this means they should be able to make their own decisions, medically, financially, etc. (Paperwork, Probate hearing)

Due to budget cuts right around the time DC was to about turn 18, anyone not covered under Title 19, lost their caseworkers through DDS (Department of Developmental Services, formally known as DMR). DDS is where the funding comes from for our children’s’ work/day programs after they leave the school system at 21.

This is the time in our children’s lives when you really need to have a caseworker. This is when you have to begin looking for a program for them when they leave school.

Before you can apply for Title 19, you first have to apply for Social Security (tons of paper work).
After you apply for Social Security, you can begin the application process for Title 19. I am fortunate that my case worker, Ruthie, at the time, was there to help with this. She came to my house and my friend who’s son is the same age as DC, came over and we all did the paperwork together. (Thank you, Ruthie! If not for you I’d still be sitting at the kitchen table trying to figure out that application!)

Every year I have to fill out the forms for Guardianship (when they come, sometimes they don’t) – just to be sure DC is still disabled. Not a big deal, just annoying. He has autism, it doesn’t go away.
There is an annual report for Social Security as well as an audit or two during the year “just because”. And….. Now that he is in a work program and makes a tiny bit of money, I have to remember to call in during and only during the first 6 days of the month to report his wages to Social Security, so they can reduce his monthly payment appropriately.

Then we get the annual Title 19 redetermination, which is basically as much paperwork as the original application. I’m not complaining, I can live with all of this, but it is a LOT of paperwork!

Now, I may not look like the most organized person in the world, but I do get all of these things done, on time, always!
DC’s redetermination was due on July 20, 2013. On July 16th I mailed a giant package with the application, the year’s worth of check stubs, his last bank statement and insurance cards – everything they asked for in the instructions.

On Monday, August 26th I received a letter from DSS (Department of Social Services) that his benefits had been discontinued because I did not complete and return his redetermination! There was a form included so I could request a hearing. This form had to be completed and returned by August 30th - in four days!

“Calm” was never and will never be a word used to describe me, so the next morning a dragged all of my “books” to work to recopy all 43 pages of his redetermination, because at this point I can’t think about anything else.

First, I decided to try to call the number (silly, yes I know). There was really no menu item that described this situation and no way to talk to a person, so I moved on to faxing the hearing notice and the copies of the redetermination to the number provided. The fax was cutting out and disconnecting and after I don’t know how many attempts, I gave up trying to fax it all.

Knowing this was going to take more than a fax at this point, I took my lunch break at 9am so I could copy all of these forms, check stubs, insurance cards and bank statements. I decided I would mail one copy to the local office and the other to the address that was on the hearing notice. Two more giant packages in the mail – Done!

I was not confident that either of these packages  would ever be seen by anyone, as they never received the original and having only 3 days now to request a hearing, I found different phone # in all of my 3 ring binder records and tried again to call. Fortunately, I was able to put the call on speaker and do some work while I waited otherwise I’d be putting in for vacation time to finish all of this! Unfortunately, all of my co-workers had to listen to “Your wait time is…. more than 20 minutes” over and over again.

An HOUR and 9 MINUTES later (just a tad more than 20 minutes), an actual person picked up. I explained the situation as calmly as I could.
Her reply was: “Oh, we’ve put a new system into place where all the redeterminations go first to our scanning facility and are inputted into our system for us to work on. Because the system has been up and down and they are very backed up, we probably do have your original redetermination and we have extended everyone’s deadline to November 20th. His benefits have not been cancelled.
Seriously? It may have been more effective to put THAT in the letter instead of telling me his benefits were cancelled and I only had 4 days to do something about it!

Those that know me can imagine where the conversation went from there, so I will spare all of you the details.

End result, she gave me her fax # and I faxed another 43 pages directly to her.  She did explain that she is not the person that would be working on my son’s case, but I wanted them to go to SOMEBODY.

So at this point, there are 3 packages of my son’s information floating around somewhere and one more in the hands of this person who has nothing to do with my son’s case.
She also informed me (after receiving 43 pages) that they really only need the last 4 paystubs. Hmmmm….. Maybe the redetermination instructions could say that!

So….
.
I feel like there was nothing accomplished here and there was an enormous amount of wasted time on both sides.
I suppose I will be in the dark until I get my notice in November.