Quarantine Diaries: Part 20 - More DC Being DC (and me being me)

As much as we have had all of that new anxiety spring up over the pandemic and being home for so long, he has also seemed to settle in to this routine (or non-routine) faster than I ever imagined. Staying at home has become the norm rather quickly.

I know this probably does not make any sense at all. He's anxious but has settled in - at the same time. I do not know know else to explain it.

I remember responding to a status a few weeks back (I don’t know what day it is so you really can’t expect me to remember who I was “taking” to).
Their child was obsessing over Halloween. What would it be like this year? Would it be cancelled?
I remember saying that thankfully (and oddly) Halloween hadn’t occurred to DC; probably because he hasn’t been so calendar oriented over that past few months.
Well... I spoke too soon.
Sigh

Has anyone come up with a 2020 Halloween plan? I mean - I really don’t want to be wiping down 200 individual pieces of candy from the trick or treat bag.

****
September:
Words I Never Expected To Hear:
I had nightmares last night/this morning and was having a hard time getting back to sleep.
I was trying to be as quiet as possible because although DC has been sleeping later during this pandemic, he is ready to jump out of bed the moment he hears a sound from me.
Any sound and he catapults out of bed, especially if there is the slightest hint of light outside.
As quiet as I was trying to be; he heard me. It was getting light outside.
“Mom! Go back to sleep!”
He gave his order and did not even wait to see if I was going to adhere to it before he went right back to sleep!
I know this doesn’t sound like a big thing but trust me - it is.
Normally (when he’s sleeping in his room instead of the couch), I have to stop in his room first to tell him I’m only up to use the bathroom - every time I get up or he would be out of bed and ready for the day at any time of night if he hears me.
Progress...
**** 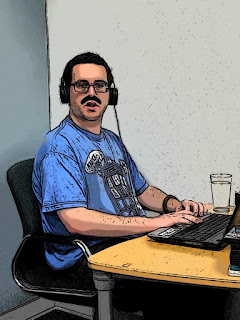 (You all know that DC slaps on a fake mustache when he is having a bad day) - Practically woke up with a mustache on. I had to go to the office (that will do it for me) and he had to come with me.

- I don’t blame him.I could have used a mustache too but he won’t lend me one.#mustacheday #crabby
****
'Kepp-en Beezy' (Keeping Busy) In September and October (so far):
DC, telling me the story of the walk we took today (I was there)
DC: I was doing the walking.
Mom and me.
I walked and walked and walked.
I walked up the hill and there was a fart.
#IsntThereAlways #Boys
****
Out to lunch today. Normally as soon as DC is finished, he begins haunting us to use the restroom; only because he is done eating and is now bored.
If you’ve haven’t been tortured with waiting outside the door for DC to get out of the restroom because he is in there singing show tunes or revisiting the Wizard of Oz script, then you don’t have any idea of how much we hold our breath hoping he will not ask to go.
He started his routine:
“I .... I ... I .. want to .... I ... want to ... want to ... I .... want to .... (wait for it)
Go to the dollar store”
We were so shocked and relieved that of course we took him to the dollar store.
Well played, DC. Well played.
****
DC’s Dad just sent him a case - not just a ream; a case of white paper, band-aids and sharpies (to make up for the 3d puzzle he sent that I couldn't even do - <not really to make up for it. I'm joking> but seriously I was ready to throw it out the door and stomp on it. Those need to be done by someone with a lot better eyesight than me

).
You probably all heard the screaming from where you are when he opened these packages!
Perfect timing - he is HAPPY! #Paper #Bandaids #Markers
****
Early October:
DC’s old “All of Oz” costume came in handy. Waiting a week or two to get pumpkins so they will make it to Halloween. Can’t wait for the mums to bloom! (Yes, I stink at scarecrows - I can’t ever get the head to stay on, so he’s headless).
I kept singing "Do you want to build a scarecrow" at DC but he wasn't finding me as hilarious as I was finding myself.
OZ is second to Disney to DC... maybe even tied. #AllOzAllOfTheTime 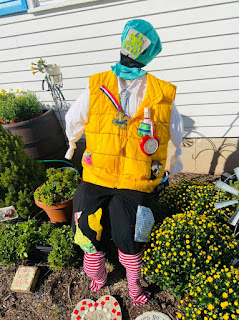 ***
DC watching the Doctor and Seven of Nine singing “You Are My Sunshine”, but he couldn’t listen without getting into the Von Trapp pose. #StarTrek #Voyager 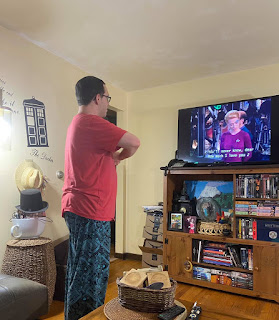 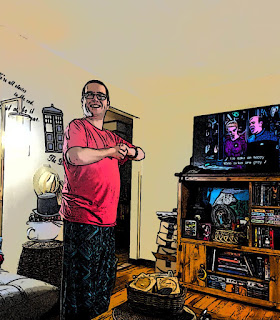 ***
We really don't know what Halloween will look like this year but I better think of something because DC is READY! I don't know if he can face another cancelled activity or disappointment this year.
We Will Come Up With Something! Trust Me!
***
You all know that Halloween is always a post of it's own! We will talk about it then.
DC did start back at his day program as well (a few days per week) and we will talk about that very soon.
See you then,
Vickie and DC
*******************