Still Counting the Days Until Christmas

My Christmas cards have not arrived (yes, I could have ordered them earlier).

There were also certain stamps that I wanted that were not available at the post office, so I had to order them on-line - so when the cards do arrive I will still be waiting on the stamps...

Meanwhile, all of the cards we have received remain unopened because..... that's a thing with me
( 😂😂😂 Go ahead, laugh, I know!).

DC received a letter from Santa a few days ago. After he read it, he hung it on the refrigerator. This morning I saw him writing on a hanging paper and thinking he was adding something to the grocery list, I asked him what he was writing.
DC: “Last Name!”
Apparently this was bothering him.... #FirstANDLastNameAlways 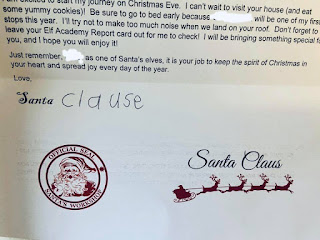 He was able to go to "Straw"Bridge, his Camp party and his Work party so were are now officially talking about Christmas Eve and Christmas (with a few twists)

Taking a short break from "reminding" me about Christmas Eve... DC woke up this morning with "Happy Thursday" (not anything he's ever said before)
I guess every day is a holiday in December.
(I did get a "days until Christmas eve" countdown very shortly afterward)
#HappyThursday

Closer and closer - Now we would really only be talking about Christmas Eve and Christmas ......

(Counting on fingers)
“Monday: Go to work - Come home if Doug feels better (Doug is not feeling well and he’s worried he won’t see him today)
Tuesday: Christmas Eve see Grandmother, go to “the place” (restaurant - he’s given up trying to pronounce the name)
I Want Presents! (He knows he can open a few gifts on Christmas Eve)
Wednesday:  Christmas Santa will come - 17 Markers.
Thursday: Back to work”
We are now officially scheduling for after Christmas.....
#MovingOn


My Cards arrived and so did the stamps on December 23rd.
I should have made the New Year Cards 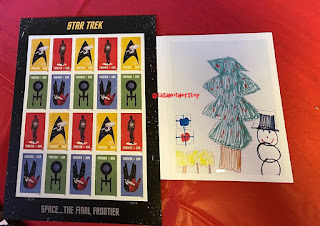 
This blog is used for shorter posts, off topic posts and also for longer Face book statuses. Please visit my official blog site at: Taking it a Step at a Time