There is extra sunscreen in his backpack 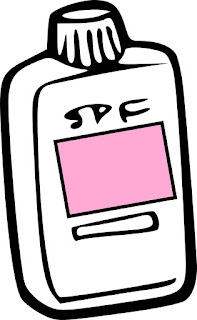 Facebook Status 4/30/18
You may or may not remember that a couple of years ago I had a very difficult time getting the people at DC's work/day program to understand that he has seasonal allergies (see below if you want to catch up). Much of the problem is that the people I talk to in his annual meetings or at any other time, do not seem to pass any of the information on to anyone else that is working with him.

When he began breaking out in a rash because of the gloves they were using in the greenhouse - that information did not carry over to the other program he works in during the winter months. Sometimes I feel as if I have to talk to each and every person individually about everything.

Normally sometime before October the program moves the clients out of the greenhouse and has them work other jobs indoors until March/April.

Last year I asked them to tell me when they would be moving back indoors so I knew I did not have to continue applying the bug spray and sunscreen every morning (for those of you new here - DC just can't stand doing that every morning and because it stayed warm and sunny much longer last year than it normally does, his tolerance for all of that was stretched to the limit).

I also told his boss that there is extra bug spray and sunscreen in his backpack everyday, if he needs it (ticks were really bad last year as well).

A few days later I got a note in his talk book "DC is now working indoors with me until April" - I didn't know who "me" was and it just blows my mind that I have to ask to be told when there are changes in his program, but I always have to.

He was very happy that first morning, not to have me apply all of the screens.

Me: "I received a note saying he was back inside until April. I did not put any sunscreen or bug spray on him this morning. Please let me know if he is going to be working outdoors so I can do that. Also, there is extra sunscreen and bug spray in his back pack if he needs it"
Staff: "We only worked outside today because we were short staffed"
(to me, that reply sounded like it was just a one day thing)
Next Day: "We watered the plants and turned over the garden today" (or whatever they did, but whatever the specifics - they worked outside).
Seriously.... when I said to let me know if he would be working outside, I meant BEFORE he was going to be working outside, not after the fact. (and still, the sunscreen and bug spray in his backpack remained untouched).

We finally made it to a point where he was not working outside anymore because.... winter.

Today I got a note from his program:
"Worked on trimmings, cleaning up the yard. Please put 'tanning' lotion on DC if sunny"

For the above mentioned allergy issue, please read Maybe it's allergies (it is short)
****

Tales from the Day Program – ALL


****
This blog is used for shorter posts and also for longer Facebook statuses. Please visit my official blog site at: Taking it a Step at a Time
Posted by Vickie at 9:16 AM