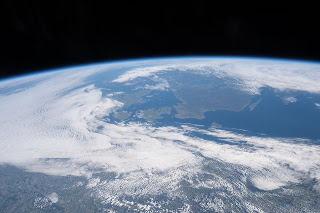 A little while ago, (right after Star Trek Day) I wrote about my quest to re-watch all of the old Star Trek Series and even view some of the re-boot movies that I had been boycotting/protesting because I felt.....

I remember my ex-husband loved U2. He was a fan way back before they became famous. I remember him being a "little bit" put out when they did become famous because, you know.... he found them first and now EVERYBODY likes them. How dare everybody like them!

I felt kind of like that about the new movies.

I had always been perfectly happy being the geek that liked Star Trek before it was popular to say so and now EVERYONE was going to watch it. We did not need anything new!

I think my opposition to ENT was that it was a prequel. I had learned to live with all of the 'Continuing Voyage' series but a prequel? BEFORE Kirk, Spock and McCoy? Oh No, No, NO!
There was NOTHING before The Original Series! Nothing!

But all these years later, I decided I should give it a try.

After finishing DS9, I decided to give Enterprise a try. This is the series I had never seen. I watched one episode….. Nope. The theme song…. Nope.

I went back to try Enterprise one more time. I am now on the 10th episode. It is holding my attention this time around (fast forwarding through the theme song, of course). Maybe the sheer boredom of re-watching the Next Generation made Enterprise more watchable for me. We will see….


The first attempt was made with a bad attitude and it took me days just to get through the first episode. It took so long that I hardly remember it now (I will have to go back and watch it again one of these days). But once I got watching, I found that I really was enjoying it.

A prequel that looks like a prequel. Technology fitting of the time period. The transporter was a new and a not so trusted technology. Warp 4.5 was the new maximum warp speed when Enterprise began her voyage. They did not even have a tractor beam.

I love the way many of the species we will meet or have already met, depending on the way you are looking at it, make appearances in ENT.

Yes, due to advances in special effects and make-up techniques, these aliens look a bit more realistic than their counterparts in TOS, but not completely redone and remain true to their TOS origins.

I adored the Andorians. I reacted with an "Awwwww" as if I was watching a Hallmark Christmas movie each time Shran showed up, out of the blue (no pun intended) to come to the aid of Archer and the Enterprise. I loved the friendship that developed between Shran and Captain Archer, although I do not believe either would describe their relationship in quite that way. It was there.

If Jeffrey Combs does not, at some point make an appearance in the new Star Trek Discovery (as anything or anyone) I will be very disappointed. He has become something of a tradition now.

Some of the episodes, I'll admit were a little bit far fetched and over the top, but still completely watchable for me. Although it took me some time to warm up to Malcolm, there really was not a main character that I did not like.

I loved the way each character evolved during the run of the series. Something, I will say again that I did not see in TNG, with the exception of Data.

I was completely heartbroken when T'Pol got married.

And even more heart broken when in the following episode when we discovered that she did actually go through with it. I was half expecting, or maybe just hoping that it would be revealed that at the last minute, she did not, but it did not turn out that way.


The marriage did end eventually but it took much longer than I would have liked.

Much like the rest of the Star Trek franchise, ENT touched upon many "outer space" versions of social issues relevant to the social issues that we face today - prejudice, genocide and deportation of all aliens from the planet to name a few.


I think the show really came into it's own during the 3rd season and even more so in the 4th and final season. I looked forward to watching every episode.

I understand that many fans were not happy with the finale due to the addition of the TNG element taking away from the fact or hijacking what was supposed to be the ENT finale. It was seen by many to be a slight or a slap in the face to the show by not getting their own finale.

I do understand that way of looking at it but it really did not bother me all that much. I think it was well done and the TNG characters did not take too much away from the ENT crew.

I was upset to find that Tucker and T'Pol were not together and hadn't been in more than 6 years. I get it - the show was trapped by the Amanda/Sarek (Spock's parents) relationship and marriage story line that we all had already seen and heard about in TOS, but I was still saddened that they were not at least still together - they didn't have to be married, but they could still have been together.

I see how this holodeck program from the past was supposed to help Commander Riker make an important decision by showing him what it means to have the trust of and to trust your captain completely and be willing to give everything in an act of sheer faith and trust in the mission at hand.

But did they really have to kill off Tucker?

I was completely wrecked when Tucker came to the galley to talk to "Chef" (Commander Riker) at the end and I suppose that was what the writers intended and that point was well made.

In the end, I was pleasantly surprised at how much I enjoyed the series and sad that it was over. Sure, I will always be able to watch it all over again, but there will never be anything like the first time. Dare I say, it may have moved over to the list as one of my favorites....

The theme song..... still not sold, but I am certainly glad that I gave the series that second chance.....

*****
As for The Next Generation, I had finally made it to the 7th season when I wrote the first post and I am still in the 7th season - but much closer to the end. I am beginning to wonder if I actually ever saw the entire series as much of it after the 3rd of 4th season did not seem familiar to me but I do seem to remember quite a lot about this last season.

I am thinking that possibly I lost track of it right in the middle of it's original run and picked it up again when DS9 hit the air. In any event, I am determined to finish re-watching TNG - I am almost there. I am finding this last season much more interesting than the middle seasons. I may write about it again when I do finally finish watching.

******
I have also started watching the latest series, Star Trek Discovery..... I am not "all in" yet, but I will write about it sometime in the future when I have more episodes or a full season under my belt.

In the meantime, please take a minute to read Autism-Mom's latest post about Star Trek Discovery (no worries, no spoilers):


******
This blog is used for shorter posts, off topic posts and also for longer Facebook statuses. Please visit my official blog site at: Taking it a Step at a Time