#TravelingWithDC: The Way Home, Easter, Mystic and a Severed Arm

Our annual trip to the Cape fell on Easter weekend this year. My friend's, mother's birthday bash was on Saturday night so we were still at the hotel on Easter morning.

Fortunately, the Easter Bunny knew that we were away and delivered to the hotel instead of at home. 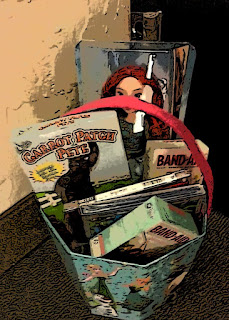 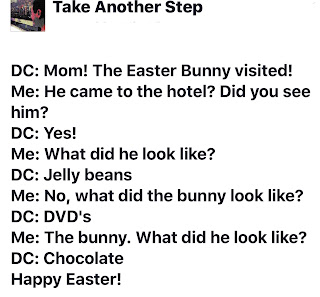 Other than any gift he might receive, a holiday in DC's mind means "out to eat" so this would be the mission for the ride home.

The plan was to stop off in Mystic, one of DC's favorite places on the way home. We've spend a few Easters in Mystic, so we knew that there would be some restaurants open even on the holiday.

I have a favorite place for dinner (S&P Oyster) but DC has an entirely different favorite restaurant (Steak Loft). DC, as always won won the battle for Easter dinner.

As I said in my previous post, this weekend was not an official "Looking Around Trip" but Doug, when he knows we will be driving through a particular area, researches Road Side America for odd stuff to stop and see. We've seen some pretty odd and some unique things during our "Looking Around Trips".

The listing said that the arm was located on one of the islands off Mystic at or near a Yacht Club. In my mind, like the island we had to drive through to get to the second island, this would be a residential area with houses and the Chapel. It wasn't. We did not read far enough into the description:

"On Ender's Island, off the coast of Mystic (accessible by car), there's a religious retreat run by a Catholic order known as the Brothers of St. Edmund, founded in France in the 19th century The order takes responsibility for the relics of St. Edmund Rich, a 13th century archbishop of Canterbury whose body has been a pilgrimage site in France for centuries."

I, even though I am not religious at all, felt really weird walking around this island looking for a severed arm, but it was listed on Road Side America, so everyone must do it, right?

It really is a pretty place and I assume that later in the spring and summer when every thing is in bloom, will be even more beautiful. 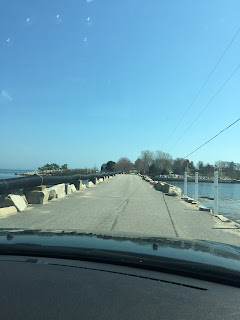 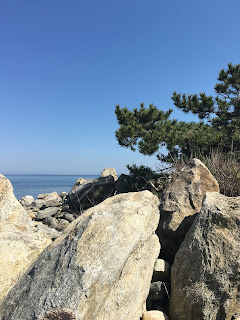 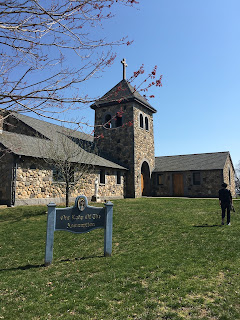 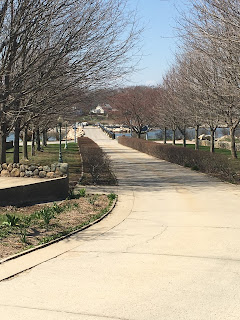 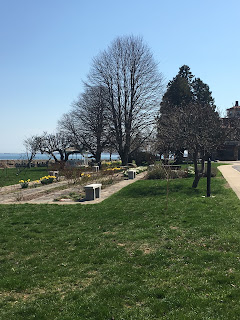 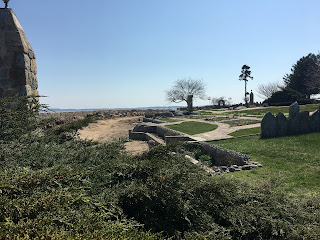 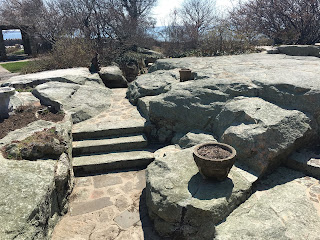 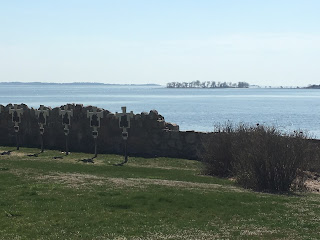 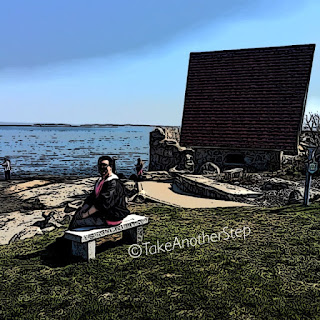 We looked all over the island and could not find it. Doug, who really does NOT have a fascination with the morbid, was intent on finding this thing, just because it was listed and if it was listed, it should be there.

We were not the only people looking around at everything on the island, so Doug went over a woman who looked like she may have been a Grandmother showing her family around the island.

At this point, I stepped away and pretended I did not even know him because there is really no tactful way to ask where a severed arm might be found. In my head I was imaging him saying "Excuse me, we are only here to see the severed arm. Do you know where it is?" (of course, he didn't ask that way, but I could not imagine any other way of asking that could make that question sound good).

She was very nice and did not seem put off by his question at all. She said that she hadn't been to see it herself recently but told him where it had always been (in the chapel that we had already been inside twice, but did not realize that there was a separate alcove in the back).

We found it. DC was busy looking around and was not really paying attention to the arm, which at first, second and third glance was not really recognizable as an arm at all. 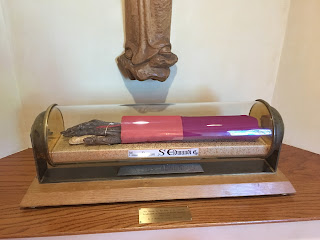 Yes, I did feel weird taking a photo of it, but apparently that is what one does when one happens upon a severed arm.

So anyway, severed arm or not.... the island itself is worth a visit. It's really pretty and different. It's not a very big island, so it does not take long to look around the entire place.

And, no... there was no "sleeping picture" taken.

****
This blog is used for shorter posts and also for longer Facebook statuses. Please visit my official blog site at: Taking it a Step at a Time