Some time ago, I wrote about our Disney Cruise, in January, 2013 – where the rule, “Don’t pick up the Princesses” was born. At the end of that post I mentioned that there was another great story to be told from the end of that trip….. so finally, here it is.
After spending 5 days on the Disney ship, our plan was to stay in Orlando for  an additional 3 days to visit Disney World and Universal Studios, because, you know, we didn’t get enough Disney on the ship……
We arrived at Gaylord Palms in Orlando. It was a beautiful place, and truth be told, I would have been perfectly happy to have skipped the cruise and just stayed there all week, but 3 days would have to do. 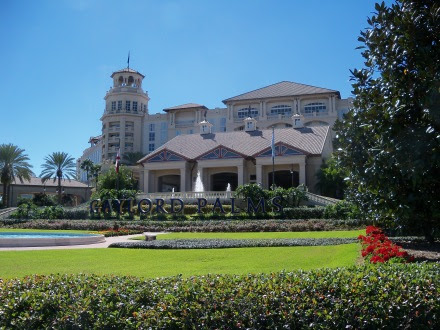 We arrived in time for dinner – a late dinner - so we didn’t get to explore all that much on the first evening. The next morning we were planning to go to Disney World. Doug was on the balcony – he called me “outside” and said he had just seen Shrek walk though the restaurant down below. This was the restaurant we were heading to for breakfast as soon as DC was out of the shower, so I figured I’d ask about it when we went down to eat.
When we got down to Villa de Flora, I told one of the waiters (Matt) that we noticed Shrek walking by earlier. I asked if this was some sort of character “meet and greet” that they have for the kids, and if so, would they be coming back anytime soon? DC was sitting at the table away from the conversation. I didn’t tell him we saw Shrek earlier and I didn’t want him to hear me ask about it in case they wouldn’t be making another appearance.
The waiter explained that the characters did not work for the resort. They were hired for an early marketing meeting and we must have seen them on their way out.
Then he said “Let me see if I can catch them” – it had been a good while since we saw them from the balcony, so I really didn’t think he’d be able to catch up to them and I wasn’t asking so he’d have to go out of his way, I just thought they were part of the resort. I told him that it was not necessary, he did not have to do that, I hadn’t mentioned it to my son at all, so he didn’t have to worry about disappointing him.
He went to talk to his manager anyway. I didn’t really think much about it after that. DC went and got his mountain of bacon and his bagels. When I got up to get some more coffee, Matt came over to me and said he had been able to catch up them in the parking lot. Again, I said it really wasn’t necessary for him to do that. He told me his manager insisted. He said that by the time he caught up with them they were all already out of their costumes but agreed to put them back on and come back in to meet DC!!!! I couldn’t believe it! I went back to the table to try to tell Doug what was happening without DC hearing any of it.
DC had his bacon and bagels – I believe this may have been the trip where he discovered bacon – so he really wasn’t paying much attention to anything else that was going on.
I saw them coming in on the other side of the restaurant….. Shrek, Puss n’ Boots and the Swamp Guard. I tried to remain calm as not to give it away, but it was hard.
I started taking pictures. DC was smiling because he saw me with the camera, and that is what he does….. stops whatever he is doing to smile. He was unaware of anything going on behind him. 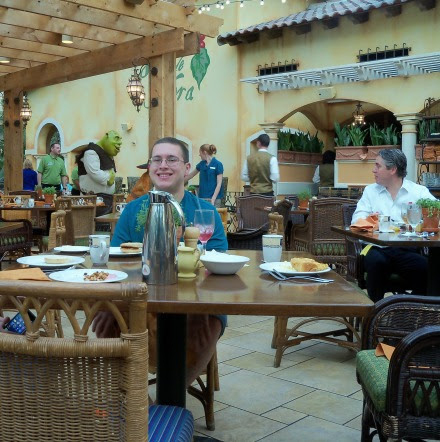 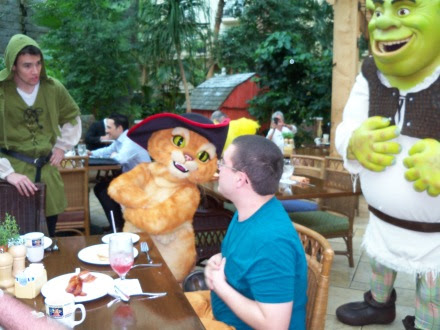 Surprise!
He was so surprised and excited when they made their way to him. He didn’t know what to do at first.  I was taking pictures with my phone. A waitress grabbed my camera from Doug and began taking pictures as well. The staff and customers seemed to be just as excited for him as we were! 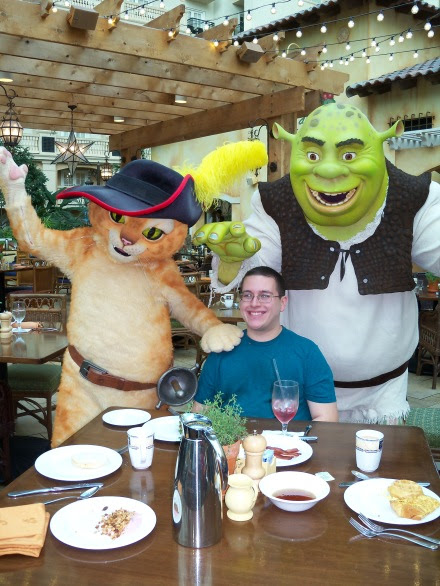 They were wonderful, the staff and the characters! I couldn’t believe that they would do this for him! The characters stayed and talked with him for a good long while. He was in his glory!
They presented him with Shrek ears and made him an “Honorary Swamp Guard”. Teaching him the Swamp Guard Salute was also included. DC was so excited and happy that he even offered to share his precious bacon with Shrek. Of course Shrek had 2 swamp rats earlier so he was quite full already.

He had the best time with them. 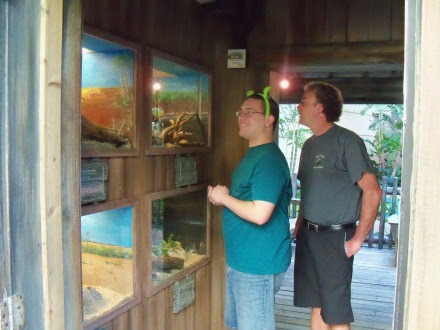 Honorary Ears
He wore his Honorary Swamp Guard, Shrek ears for most of the remainder of the trip. 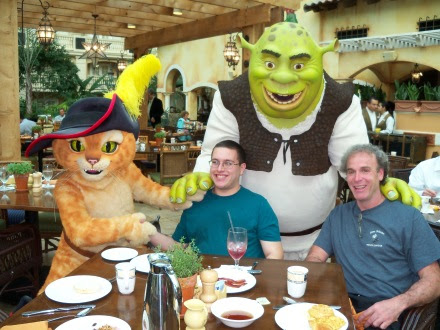 I still can not believe how these wonderful people went so far out of their way for DC. I mean, I only asked a simple question. I never expected any of this. This made his day – it made his trip!
I thanked everyone I could find to thank and went back the following morning to thank the people I could not find the day before.
I tweeted, Facebooked and wrote an e-mail to Gaylord Palms. I wanted to be sure they were aware of the wonderful staff they had working in their resort.
Then, just to add the cherry to the top of this sundae…… I found these on my camera when we arrived home……