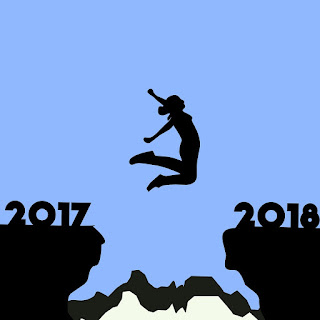 Okay, so I am pushing 2017 a bit, but in all seriousness - I just want this year to be over.
I have my top 5 from my main blog ready to post on January 1st, but I realized that I have never done a year end wrap up over on this site.

This site was my original public blog site (the original, original was a local site) after moving everything over to my now main site, I really only used this to re-post blogs from there. A few years ago, I started using it to re-post longer face book statuses from my page, combinations of face book statuses on the same subject, off topic posts or extra posts when I decided I had something to say after already posting on my other site (so as not to bombard my followers with multiple posts).

I only recently realized that this site gets a decent amount of views, so I have been paying more attention to it over the last year or so.

(((Spoiler Alert: Kim Rhodes made the list on both blogs))))
All links open in new windows....

(off topic)
Since September is turning out to be my month to complain and be just plain B#&%hy,  I may as well just continue... (believe me, I've got more)
Just a little "annoyance" .... Continue Reading

For those who might be new here... DC hates the air conditioner ('Hair-dish-on' in DC-speak). He has never been a fan but this summer it seemed to be bothering him a little bit more. Let me also say that I, living in "Hot Flash Hell" was not ready to let it go.
Just.  Could. Not. Do. It.
(You can read the previous post on the subject here: Is it Hot in Here or Is It Just Me?)

Why I write? I never really intended to write a blog. My blogging began one day when I was writing an extremely long response to a blog post that I had just finished reading. After I hit “post” I decided that writing a response to this post on someone else’s blog was not going to make me feel better about the topic being discussed. I opened an account, copied and pasted that very long comment, on to a page and started my blog. Continue Reading
*****
#3  - Zack and Cody's Mom! - July 2017

Apparently DC's psychic abilities extend further than just knowing where the food is hidden or when I have been to the store.........Just a few days ago I purchased tickets for the Supernatural NJ Convention. DC knows the show and met a few of the cast at the Rhode Island ComicCon a while back,  so it will not be totally boring for him and we will be able to spend one of the weekend days in New York City; his favorite place. A Win, Win situation for us (except Doug, aka *"Except This Guy" who just hates these things.   Continue Reading

(off topic)Last week, I posted a Throwback Thursday post on my face book page. It was about some of the ridiculous things, you know, things that make you wonder, that I had done over the last few years.Reading it over and altogether, I resemble a walking disaster area, but they happened over a long span of time so it probably wasn't as bad as it appeared to be on paper.  Continue Reading 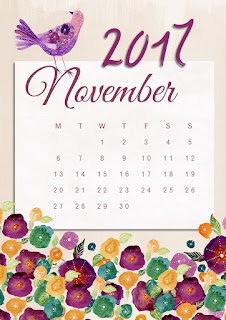 For some reason, I seem to be convinced that this week is not the end of November but the first week of December. I don't know why but I have to keep reminding myself that there is still a few days left before the first full week of December.
DC had a doctor's appointment yesterday and I was SURE he had a dental appointment today, even though I was already reminded once (okay.... twice. OKAY! 3 Times) that the appointment is NEXT Tuesday, I just could not get it out of my head that this/today was not December 5th.
(One might think that having Mr. Calendar in the house might keep me on the right path as to what day it is, but Nooooo -  for some reason he just took my word for it)
I made all of the arrangements one makes when one's child has an appointment: 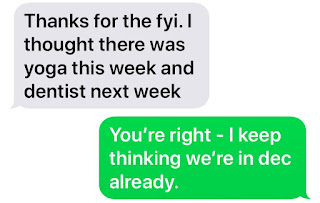 #$@&!
So now I had to admit to being a human train wreck (which probably did not come as much of a surprise to anyone) and undo everything I just did.
After being wound up since Sunday about his dental appointment, I now had to try to unwind him. One might imagine that because he was so wound up about the dentist that he would be happy or relieved that it was cancelled. Oddly, this is not always the case. Sometimes he just gets more wound up. I believe it is because he has put so much time into obsessing about the thing he does not want to do- it actually makes him angrier when we just cannot just get it over with. I was hoping that this would not be one of those times.
I decided to Face Time him.
Using the telephone has been a work in progress for many years**.
I do try to use Face Time every once in a while so he is familiar with it.  If something were to happen or he should get lost, he might be able to show me what he is may not be able to communicate.
In this case, I wanted to be able to see him and know that he was paying attention to what I was saying. I had to try twice to get him to pick up the call.
When he did finally answer, all I saw was 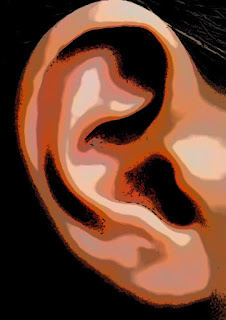 his ear... (we definitely need to work on this a little bit more)
I got him to look at me and made sure he was paying attention.
I started out with:
"Mom made a mistake." (Because he LOVES that!).
Fortunately Mom making a mistake combined with not missing yoga over-rode his anxiety about the appointment being cancelled.
******

This blog is used for shorter posts also for longer Facebook statuses. Please visit my official blog site at: Taking it a Step at a Time