Everything seems to be related

While flipping channels this morning - DC discovered Bewitched... I see it being added to his obsession with all things witches (Sabrina, Charmed, Twitches, Halloweentown). But the thing that first caught his eye was Agnes Moorehead who was Miss Snow in Pollyanna because everything is related and most things are related directly back to Disney.

This made me remember when DC was in maybe 3rd or 4th grade. He must have had Pollyanna on the brain that day. I got a note home from his teacher and it said nothing else except "Who is Jimmy Bean?????" - he must have been on that subject all day! 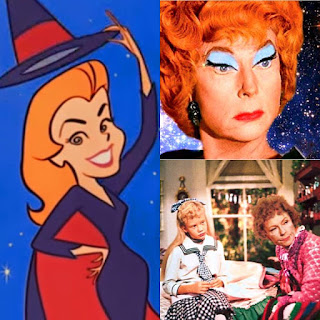 DC on IMDB, going through the cast of Into The Woods - not that he couldn't tell you who every single person is already - it's just what he does. He can give you the cast of the original 80's version as well. If you want to know who was "the voice of" any Disney character, he is also your man.
While going through the cast list of whatever movie he is obsessed with on any given day (Today being "into the woods"), he also feels the need to yell to me who the actor "is not", meaning; what character the particular actor has played in one of his other favorite movies, but is not playing in this movie.
Today's Into the Woods list of characters/actors who "are not":
"Christine Baransky - Evil Stepmother - not Prunella from Eloise at Christmastime"
"Lucy Punch - Lucinda but not Hattie from Ella Enchanted"
"Tracy Ullman - Jack's mother, not Princess Winifred from Once Upon a Mattress"
"Johnny Depp (pronounced 'Deep' in DC-speak) - the wolf, not Willy Wonka, Mad Hatter or Captain Jack"
But then... We need to veer off in another direction with the mention of Willy Wonka (or any remake of a movie he likes) because he also must add that Johnny 'Deep' is not Gene Wider....
(You can see how this could go on and on for quite some time)