He has just discovered that NBC will attempt a live performance of  Peter Pan (Peter Pan Live) this Thursday night. It is already written on the calendar so there is no way out of it. I was required to add it to the calendar the moment he saw the commercial.

Last year, I suffered through “The Sound of Music Live” and I was really hoping to avoid “Peter Pan Live” this year. Yes, I knew it was coming but I remembered that they released the “Sound of Music Live” DVD in time for Christmas last year, so yes, I pre-ordered the “Peter Pan Live” DVD this year because no, I don’t want him to miss out on it altogether, I just really didn’t want to have to watch it myself as he watches his DVD’s in his room or on his laptop. My plan really didn’t work out all that well…. he saw the commercial.

So come Thursday night, you know where we will be.

In anticipation of Peter Pan Live, and in remembrance of  ” The Sound of Music Live” –  here is my post from December 2013: 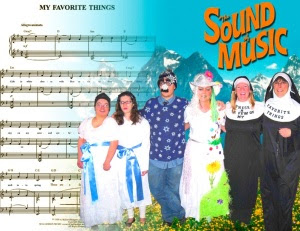 One of DC’s favorite musicals – and there are plenty- is the Sound Of Music.
He was introduced to the Sound Of Music by his cousin Erica, who gave him his first copy of the movie in VHS form when he was 6 or 7. I never imagined he would watch it, let alone learn every word to every song, but he did. It is still one of his favorites.
He has the DVDs, the soundtrack, the album insert,  books (which were not easy to find), Christmas ornaments, music box,  he dressed as “Snowflakes that stay on my nose and eyelashes” 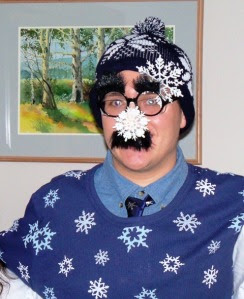 for the “Sound Of Music Sing-A-Long” a few years back….. you get the picture…… he loves it. 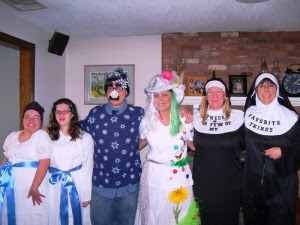 (Photo:Girls in white dresses with blue satin sashes, snowflakes that stay on my nose and
eyelashes, silver white winters that melt into spring, these are a few of my favorite things)


***I am fortunate to have friends that are willing to go all out for something that DC loves so much; we all took a line from that song and dressed appropriately for the Sing-A-Long. He and his friends had a ball and I think after the initial embarrassment, my friends did as well.***

A few weeks ago I found myself being tortured with “The Sound of Music Live”**. My fault! I told him it was on! I then regretted that for the next 2 hours.  DC informed me over and over again that this was “Not Julie Andrews”, but he loved it anyway.
While I was trying to endure this version, my mind went back to DC’s time in the school system and more specifically, the mainstream portion of his time there……


I am all for inclusion and mainstreaming, IF it is done properly. In Dc’s case, there were many battles over many years because it was not.
Just a few examples: His history class was studying Apartheid and DC was coloring pictures of Africa.

His history class was studying Nazi Germany and he was sent off to watch “The Sound of Music” (because that’s a true and complete picture of Nazi Germany) .
Inclusion? –  I don’t think so! I understand that these concepts were somewhat out of his reach, but if nothing else, shouldn’t this inclusion include social interaction with peers and some sort of participation in and with the class? How did they call this “Inclusion” when he was coloring in the back of the room or in another room watching an entirely different movie?

As we were watching “The Sound of Music Live” and singing “Edelweiss” together – as is mandatory, I remembered one teacher, years ago; his second grade teacher, Mrs. Fair* . She went out of her way to not only include DC in the class BUT, believe it or not, to also include the entire class in activities that DC enjoyed. She made him a part of this class. He was not an observer or off on the side lines, he was a part of the class.
I can give you many examples of the things she did to achieve this, but the one that came to mind that night was; She was aware of DC’s love for the “Sound Of Music” and his love for “Edelweiss”. She had the entire class learn all of the words to the song and once or twice a week, she and DC would lead the class in song. He loved it!  She made sure he was part of this class, she made sure his “inclusion” was not just one- sided, she made sure he was comfortable with his classmates and better yet, they were comfortable with him. He just adored her.

It is unfortunate that she was the exception and not the norm. He still remembers her all these years later and the Sound of Music is still one of his “Favorite Things”

*Name changed
**Yes, he is getting the DVD and soundtrack for Christmas, but he can watch/listen to it in his room