Camp: A Season in Statuses

DC attended his summer camp on Thursdays and Fridays this season. It has been a long time since he was still in school and able to attend 5 days a week, all summer long. I am glad that he is still allowed to attend a few days at least, now that he is "working" (in a year round Group Supported Employment day program).

He had his "First Day Jitters" or "Arrival Anxiety" but spotted his friend Ron, so his arrival went much more smoothly than it usually does...

DC's first day of camp this season.....
Camp, Old Friends and a Little Bit of Anxiety 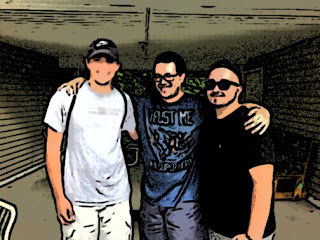 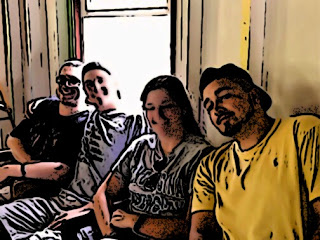 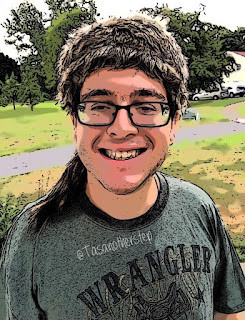 HAT DAY! DC’s favorite day at camp - always. This year’s choice; Davy Crockett. Now don’t let him fool you. He has absolutely no interest in Davy Crockett, his one and only reason for choosing this hat was because it, in his mind is like having a ponytail. This guy wants nothing more than to have long hair (unfortunately, his hair grows out instead of down).
As for me, the Davy Crockett song has been playing in my head all day.
Just follow the bouncing ball and E V E R Y BODY SING ....

🎵 Born on a mountaintop in Tennessee.... 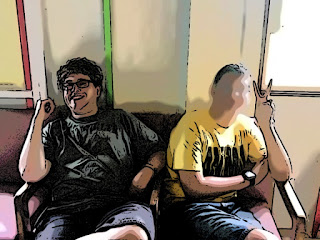 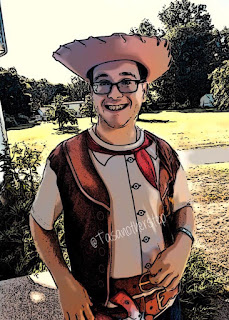 Disney day at camp. I offered to cut his Woody costume (he hasn’t worn it in years) so he could just wear the top but he said no. I was not sure that he really understood what I meant. I think he thought he’d still have to wear the whole costume. A lot of the time he doesn’t understand until he sees it, but I didn’t want to cut it and then find out he still did not want to wear it.... so here we have a “makeshift” version of Woody. Now we’ll have to come up with something different for Wild West Day.  He was happy with it, so that’s all that matters. #HappyDisneyDay#AllDisneyAllOfTheTime

Until "Cinderella" showed up and then he was angry that he was not "Prince Charming". 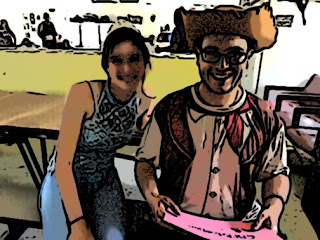 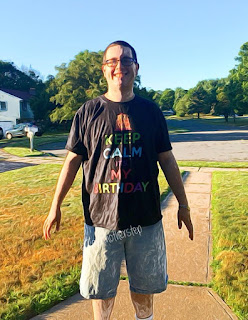 No, It’s NOT his birthday. It is Birthday Party Day at Camp which provides an opportunity for him to wear his birthday shirt a second time this year.
Knowing that he just might take full advantage of everyone thinking it is his birthday, I told him that if anyone asked, he needs to tell them that it is not his birthday.
DC: Okay Mom
We practiced (yes, it would have been easier just not to wear the shirt but he’d been talking about it all week) and practiced. He had it.
This morning I asked: “DC is it your birthday?”
DC: (complete with smirk) YES!
#HappyUnBirthday #NoGiftsPlease

(I was told that all of the practice did NOT stick) 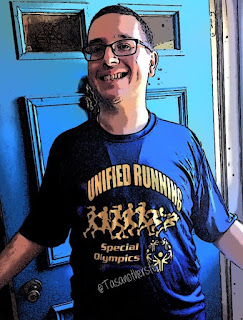 It was Olympics day at camp (his Special Olympics Running shirt came in handy). When he called from the car he screeched (happily) that he won gold medals. I haven’t gotten anymore information than that (but any time he participates in any kind of sport, he insists that he won - so there’s that). I don’t know what he “won” at and he had no medals when he got home, but he was happy about winning those invisible medals.
#MysteryGames #Winning 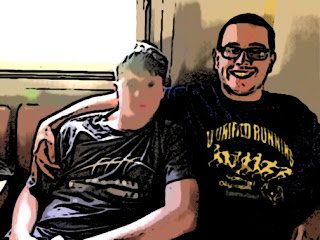 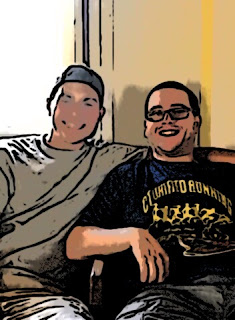 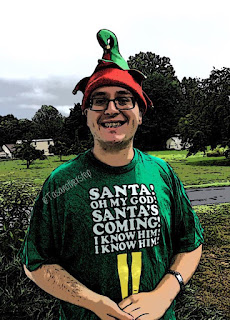 Not that there is ever a wrong day to wear Christmas gear in DC-land, but it is Christmas Week at the Camp After Program. Wearing a holiday shirt and hat all day before After Camp begins..... Not a problem.
#MyHatHasBells #ChristmasInJuly
#SummerCamp 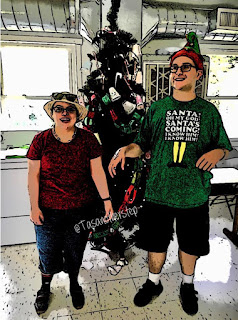 There was a bit of "warm snow" (goooood one - I am going to have to remember that one) to make their celebration complete.
Still a "Little Bit" of a distraction for DC 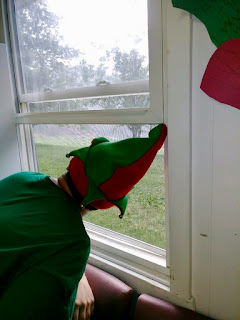 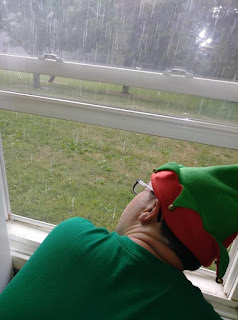 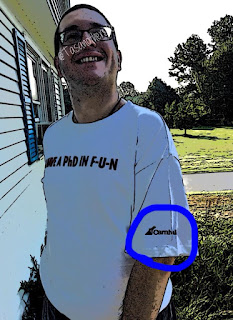 Yeah, okay... it’s a stretch (although I do crack myself up). It’s Carnival Day at Camp. He MUST have wanted to be “in theme” because he agreed to wear white! DC does not like to wear white (unless it’s a dress shirt with a tie) or gray, because apparently gray is just dark white.
#SummerCamp #CarnivalDay #MomIsNotVeryFunny 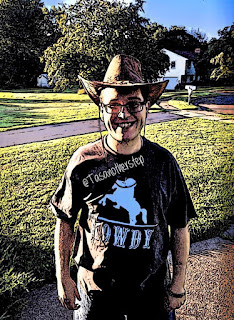 Wild West Day at Camp. And make no mistake, this is Wild West Day “Not Disney Woody” (DC-speak).
#Camp #WildWestDay

(We found a different hat in his ever-growing hat collection - Phew!) 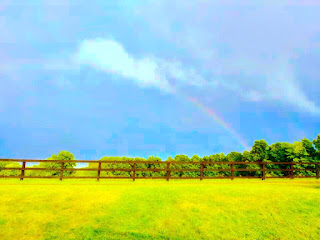 There was quite a lot of thunder and rain while DC was at “After Camp” last night.
Ms. “Giselle” made him King because Kings are not afraid of storms (it didn’t stop him from running to the windows all night). Apparently it made a bit of an impression on him because this morning he declared himself “King of the Storm” and told me how brave he was by showing me his muscles.

😃
King of the Storm ...... I’m going to have to remember that.
I also hear that there was a rainbow and some singing of Somewhere Over The Rainbow after the storm. (Photo stolen from camp) #AllOzAllOfTheTime too . #camp #KingOfTheStorm

Note: The After Camp Program - DC has attended this program for many years. It is a long day 9-3 at camp and then an invited few (those who can handle being at camp for such a long stretch of time) stay for activities and dinner until 8, once or twice a week.

DC was not going to attend the After-Camp program this year because the After-Camp Director, who DC just loved, retired. But then.... we learned that "Ms. Giselle" (DC gives everyone a Disney Character or Princess name - in this case, Amy Adams from Enchanted) who was his group leader for many years when he attended daily and who he ADORES would be taking the position.

Dinner: We all know that DC has a limited menu of items that he will eat. The old director, by some miracle could get him to eat (or at least try) ANYTHING! It was impressive.

Ms. Giselle, not only came up with "Warm Snow" and "King of the Storm" but also incorporated the "No Thank You Bite" - so the tradition of DC eating or at least trying new foods lived on at After-Camp. 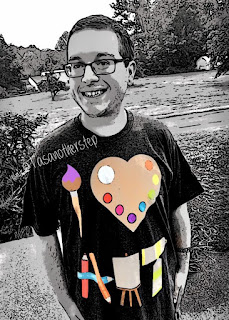 We’re down to the wire.... The last two days of camp. Today; ‘HEARTS and CRAPS’
show.  #ArtsAndCrafts

(DC has never been a big fan of Arts and Crafts so I was curious to see if he had anything at all in the show. I asked him to take a picture. I asked him if he made anything for the show and he gave me a different answer each time - A Heart, a Hat and one other that I do not remember. I do not know if any of his answers were the truth and I did not get a picture) 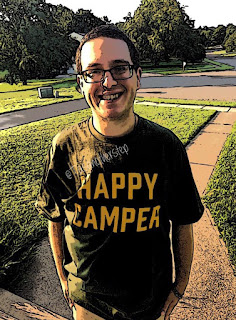 Last day of Camp. Happy Camper not because Camp is going to be over, but because he thinks - no matter how much I try to explain it it him - that this means that the air conditioners, ‘hair - dish - ons’ in DC-speak, will be coming out.
. ... No, Nope, Not Even Close..
#IsItHotInHereOrIsItJustMe

The last day of camp is also Camper Awards Day: 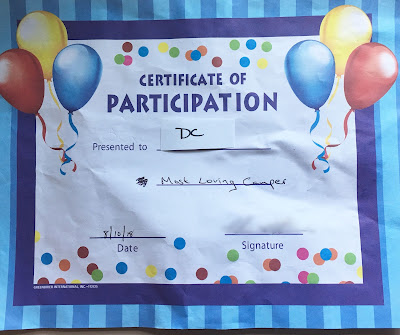