A few days before Christmas, I read a post from another favorite blogger of mine, Mother O’ Jim, titled “When Delaying is Enhancing…” . The blog was about her son’s Christmas anxiety over a gift he knew he was going to receive (give it a read if you have a minute) and the steps taken to minimize his anxiety.

While I was reading this post I was thinking about DC. Although he does get very excited and anxious around Christmas-time, reminding me many times everyday that “Christmas is coming soon” – he does not seem to get as anxious as Jim from the blog.

I was a little bit concerned about this Christmas though. Everything about this holiday season seemed to be different. Thanksgiving is normally spent at a restaurant (the same restaurant) with DC, Doug, my brother and sister-in-law and at times, my niece. This year, my niece had moved out of state a few months earlier and Doug was away on a cruise with his sister and his father. The restaurant even seemed to be different, more crowded and much less organized.

DC’s Dad decided to go to Florida for an undetermined amount of time. He left in mid-November. He would not be here around Christmas for DC and for the first time ever, we decided to take our vacation a few weeks earlier than usual and were scheduled to leave Christmas morning. We had to leave the house by 8:30 in the morning.

DC does understand that now that he is an adult, Santa only brings his stocking. The rest of the gifts are from me (Mom). But, would he understand when he woke up on Christmas morning to only a stocking, even if he received the same big pile of gifts the night before? I explained this to him over and over again and he said he understood. This NEVER means that he really understands.

After reading the blog I spoke of earlier, I got a little bit more anxious about it. Jim was happy to get his gift early as would DC, but I know in his head, this would not – even if he agreed that it would – eliminate the expectation of the Christmas morning pile of gifts. I know this from the many, many times I have given him choices to do “this” or have “this” now instead of later or instead of doing or having something different. He agrees but then still expects whatever he traded away.

I realized that I would have to do more than explain it to him over and over again. I thought about showing him pictures, but then I realized that it would make more sense to him and he would not think he’s missing out if he saw the same pile of gifts just being given at a different time.

So I took a photo of our tree and another of the bookcase where Santa usually leaves his stocking and I usually leave his surprise gifts. Then I cut out photos of presents that I could move from one place to the other so he could see that he would be getting the same amount of gifts, just earlier than usual.

(Excuse the quality. It seems that every time I need to print – the ink just about gone)

Normally after opening gifts at my mother’s, we come home and DC opens the gifts that are already under the tree. There is usually only a few because he knows he’ll be receiving Mom’s hidden gifts in the morning with his stocking from Santa. 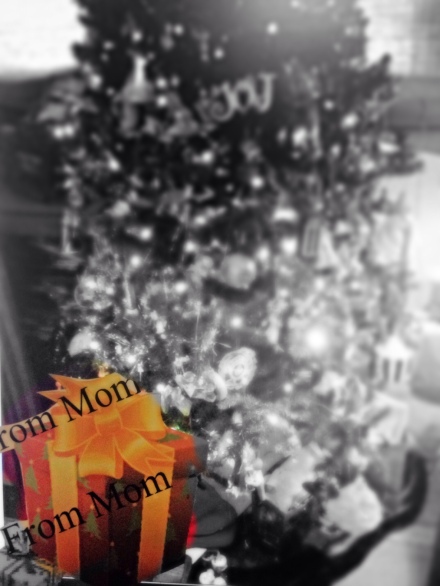 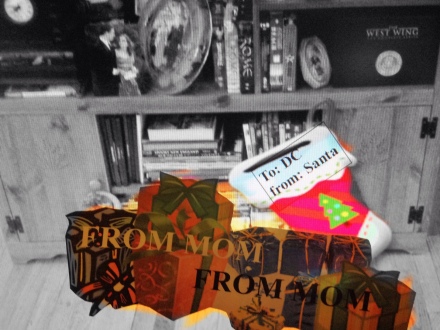 I had him move the gifts himself, from Christmas morning to Christmas Eve.

Christmas Eve. All of Mom’s gifts

So…..Christmas morning would be just Santa. 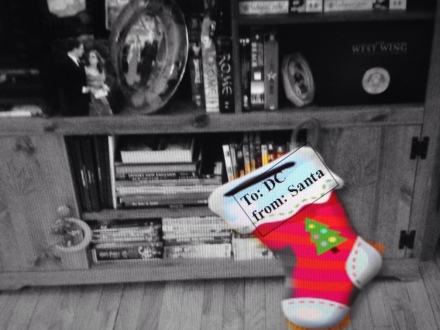 (Santa would surprise him with another stocking at the hotel when we arrived, but he was not aware of this yet)

We did this every day until I was as sure as I could be that he understood that he was getting the same amount of gifts… just earlier.

Still I was a little bit nervous about Christmas morning….

He was up very early as usual – this was fine since we had to leave early.
He saw the stocking filled with everything he’d asked Santa for. He was happy, maybe not as excited as he usually is, but he wasn’t disappointed – that had been my biggest concern.

There was enough time to use and play with everything in the stocking and enough time to watch the entire Peter Pan Live DVD he’d asked for.
He never made it through the 3 hour version when it was live on TV, but without commercials, it was only an hour and a half!
I am still not a fan….but this time around, DC really enjoyed it.
As DC would say, “Phew, I was very nervous about this!”
Fortunately, it worked out well and he had a Merry Christmas!
Posted by Vickie at 12:08 AM