Second Star to the Right……… and hang a left. 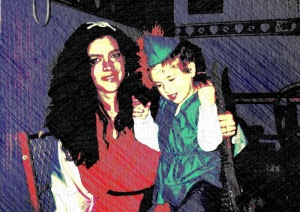 DC and I were driving to the store this past weekend. He had the Peter Pan CD that he had checked out of the library a few days earlier. Like many of the books he borrows each week, he already owns this CD, but still he must check it out from the library. The “library” CD’s are to be listened to in the car only – this is one of those “official DC rules” that he makes up in his head. I’m sure there are very good reasons for the rules he comes up with, but I really don’t know what these reasons are or where these rules come from, but he follows them to the letter – always.

DC has every version of Peter Pan imaginable. He has the old black and white Mary Martin version, the Cathy Rigby version, the Disney version, the non-animated version that came out a few years ago (maybe more – I have no sense of time anymore), Finding Neverland, the sequels to the Disney version and Hook. He has copies of the soundtracks to all of them as well. The only Peter Pan themed movie he would never watch was Hook. I do not know why but he refused to watch it. It happens to be my favorite version of Peter Pan so I really tried for years to get him to watch it.  I’ve had watch Peter Pan for more than 20 years,  and at times it would have been nice to watch the version I enjoy.

Obviously this was not one of “DC’s rules”.

Somewhere along the line DC discovered that Robin Williams – the voice of the Genie, was in Hook – that was all he needed to figure out and now it is also one of his favorites. Everything is related, and once he is able to relate a character to another he likes, he’s “hooked”.

(One day I will write about how everything is related. It probably won’t make a lot of sense to you, but it will sure be fun for me to write)

After listening to “Tender Shepard” six times, I told DC he had to move on to a different song. He did, but we soon moved back to “Tender Shepard”. This song is from the Mary Martin/Cathy Rigby version of Peter Pan. This version seems to be his all-time favorite. Zoning out while listening to this song….AGAIN, I started to think about Hurricane Irene back in 2011, because

It was Friday, August 26, 2011. I was on my way to my first appointment of the day to look at a few MORE day programs. This is the way every Friday that summer had been spent. I generally have Fridays off during the summer so it was a perfect opportunity to go and check out day/work programs for DC, as he would be finished with school and his transition program the following June (2012). On the way there, I received a phone call from Doug.

“Listen, we are supposed to be getting a big storm here over the weekend – do you want to just take off for Vegas for the weekend?”

Many of you know that DC is terrified of storms. I don’t think it is the actual storm, it is the fear of loosing power, that scares him. This storm was  supposed to be a big one – a hurricane.
I called him back and suggested that he try to find somewhere closer and I would consider it.

After my first meeting, and failing miserably at  “I can’t think about this right now” – I called Doug back. He was checking the weather and the path of the storm and decided on Pennsylvania – it may be rainy there but it should not be as bad as they were reporting it could get here.

After my third meeting, I went home, packed quickly (I must say I did a much better job packing with no notice than when I plan for a scheduled vacation) and when DC came home Doug came over, picked us up and we were off. I didn’t have any great expectations about this weekend. I really thought the weather would be bad and we would be sitting in the hotel room most of the time, and I did explain this to DC. As long as he was going to a hotel (his favorite) and there would be power, television and food, he was all for it!

We did consider, although it was never mentioned to DC, Hershey Park, weather permitting. A scheduled trip to Hershey Park a few months earlier had been a bit of a disaster – something I will not be writing about – and a do-over would be fantastic. But as I said, I didn’t have any expectations at all.

Arriving in PA, DC was happy to be in a hotel room. He took his favorite spot at the desk and happily edited his books on Friday night.

Saturday was a little bit overcast but a very nice day. We decided to take our chances with the Hershey Park do-over.

We could not have planned for a better day or a better time! DC got to go on all of the rides he missed during the “de-aster” (DC-speak) trip. There was a total of 5 minutes of rain while we were at the park, even that didn’t really bother him as it normally would.  It cleared up quickly and we continued on exploring the rest of the park. 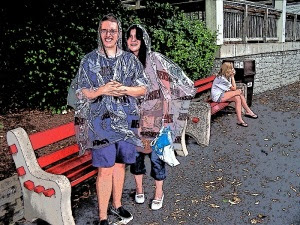 We almost didn’t make it there on our first trip, and when we did, I held my breath the entire time. It was wonderful to be able to take him back there relaxed and breathing normally. 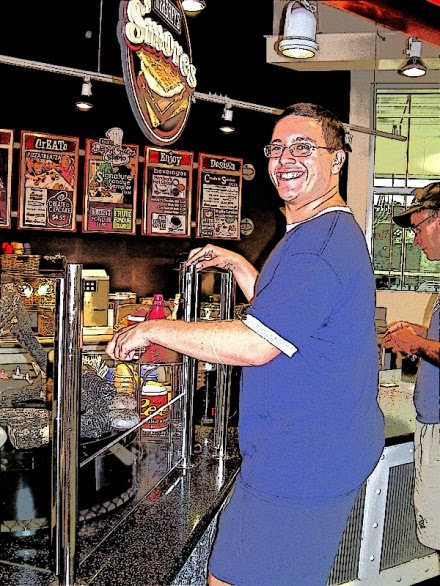 On the way back to the hotel, I spotted a sign outside of the Hershey Theater for Peter Pan staring Cathy Rigby. We had taken DC to see Cathy Rigby in Peter Pan when he was much younger and he just loved it. I noticed that there was a performance scheduled for Sunday afternoon and Sunday evening. The forecast was calling for rain on Sunday so we thought we’d check to see if there were tickets still available for Sunday afternoon. We decided to check on line when we got back to the hotel. I didn’t want to mention it to DC until we knew, so walking into the box office was not an option.

It turns out that there were tickets available!

On Sunday morning on the way to breakfast, making his trip the “best trip ever” – he found a bookstore.

The play was early enough so that we could still leave at a reasonable time to get home and sleep before work for me and the first day of school for DC on Monday. 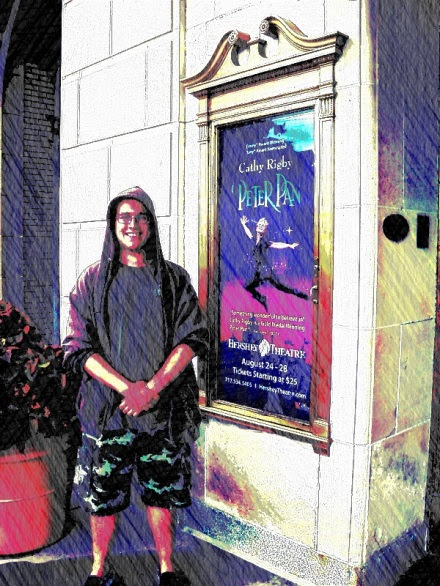 DC loved the show, loved it! They announced during the curtain call that Cathy Rigby would be available for photos and autographs in the lobby immediately after the show was over! Can this get any better for him?!

If I had planned this trip for months, it could not have worked out better than this last minute, impromptu, Hurricane trip worked out!

DC met Cathy Rigby, had his picture taken with her, got her autograph and sat on her lap – I did try to stop him from sitting on her lap because DC is a BIG boy, but I was too late and she didn’t seem to mind. Her signed poster still hangs in his room.

How much better could all of this have worked out? I am still amazed about how smoothly this weekend went.

After the play we headed home, from our “Escape form Irene” weekend.

We arrived to find that the first day of school had already been canceled due to the power  outages. It turned out that our side of town never lost power at all.

Two months later, we wouldn't be so lucky, but for now we had just returned  home from – in DC’s words – “The Best trip ever”.
Posted by Vickie at 9:48 AM