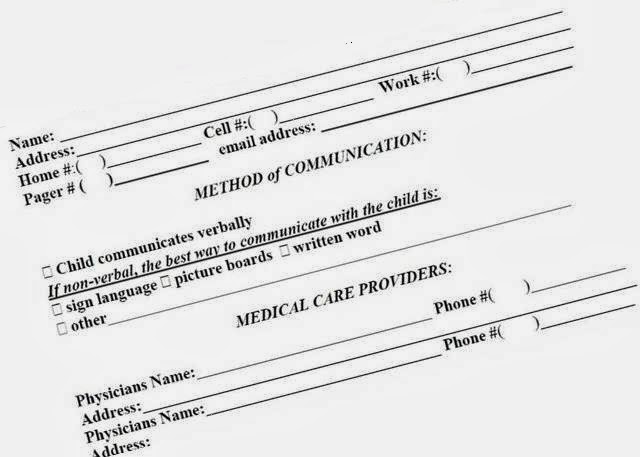 I’m sitting here once again trying to fill out a form to describe my son, one of the hundreds of forms I’ve had to fill out over the last 22 years. It doesn’t get easier. This particular form is for the Police and Fire Department for a program that keeps information on file about the special needs children in town so if they wander, become lost or if some emergency happens in the home, the police and fire departments have pertinent information on our children, their disability, how to manage the situation, what makes them anxious, what calms them down, where they might go, etc.
It’s a very necessary program and we are thankful to have it, but how do you explain autism to anyone who knows nothing about it or knows only what they’ve seen on TV, movies, or read in a few articles?
How do you explain my son without writing pages and pages of examples and still not be able to make it clear for anyone?
He was taught never to open the door, so he is NOT opening the door, for ANYONE, even to the police. He will stand behind the door and yell “Don’t open the door” but he’s not going to open it. I can’t teach him not to open the door to anyone, except for the police or fire department. There is no “except for”, no grey areas, it’s one way or the other.
How do you explain how to ask him a question, knowing that most times he will not understand the question and if you ask him more than once he will just resort to “I don’t know” or “Nothing’s wrong”.
This doesn’t mean he doesn’t have something to say, it only means he doesn’t know how to get the answer out and he’s afraid he’s giving the wrong answer so he’ll change it if you ask him more than once, BUT you also HAVE to ask him more than once to be sure he’s not giving you a random answer so you’ll stop asking. You also have to be careful not to ask in a way that might lead him to the wrong answer and even then you don’t always know if you are getting the correct information.
How do you explain that he gets “me” and “you” mixed up, “mine” and yours”, “do” and “don’t” – but only some of the time? How will anyone else be able to determine if he’s getting it right or if he has it reversed?
Most forms that I’ve had to fill out over the years ask if he is “Verbal” or “Non-Verbal” – there is no cut and dry answer to that question. “Verbal”, to a person that doesn’t have much exposure to Autism, will assume that it means he can communicate. Verbal and Communication can be two VERY different things. Yes, he is verbal, but for the most part it is to communicate what he wants or needs, if he’s proud about something, or to recite random and often obscure Disney or movie lines; he really can’t communicate when there is something wrong and/or what is wrong, if he’s sick, or if something hurts. Answering that question so it makes any sense at all is always an issue.
Add this to the fact that everyone is different; there are no “engraved in stone” symptoms that everyone with Autism shares – they can be as different as night and day.
I don’t know what the answer is, I don’t know how we can make others aware of the many differences in our children without giving them pages and pages of information( that most won’t make it all the way through) and still will not give the full scope of what they are all about… individually. There is such a wide spectrum (“spectrum”, a rant for another day) between “Rain Man” and “Max Braverman’s” of the world. I still don’t know, after 22 years of trying, how to explain it at all and worse, how to explain it on paper.